How to eat less meat and more plants: Try “Vegan After 6” 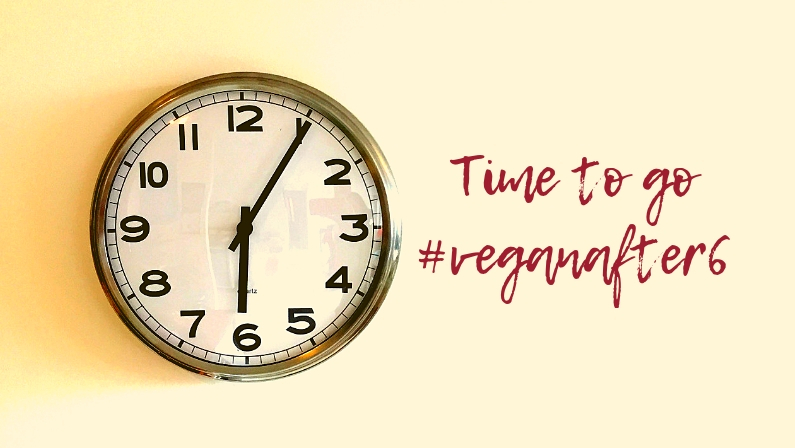 Are one of the many home cooks trying to figure out how to eat less meat and more plants? I have a new idea for you: try going Vegan After 6.

“Oh, yes, we are trying to cut back on meat,” or “I hardly eat meat anymore, except at my mother-in-law’s house.” I hear such comments every time I meet new people. Often, the type of meat matters: “I don’t eat red meat at all anymore, just chicken.” Or “We don’t have meat at home anymore, but the kids are picky and they like fish so we do have that.” Significant others often get pointed at: “I like to make a big salad for myself but my husband needs a chicken breast on top.”

If the conversation goes on for a minute or two, I often ask my new acquaintance what kind of plant-based meals they like to cook. Most of the time I get a blank stare. I do not doubt that most people I meet sincerely want to eat less meat and more plants. Some want to change their diet for health reasons. Others are worried about animal agriculture’s impact on climate change.

But, in practice, when 6 pm comes around, they still default to meat, dairy, and eggs.

How do I know? The fact is that animal farming is accelerating all over the world. Even in Canada, where we apparently have a “mind-blowing” number of young vegans and vegetarians, the numbers of pigs, chickens, and even cows (red meat!) raised for meat have grown two to three times faster than the country’s population since 2010. (I checked exports, they are only significant for pigs, and still do not explain all the growth.)

The data shows that just wishing to eat less meat and more plants is not enough.

Good intentions do not improve our health, or decrease the catastrophic footprint of animal agriculture on our water and land. From the animals’ perspective, eating less red meat is even worse: it takes more than 100 chickens to yield the same amount of meat as a single cow. Think of all the sentient beings slaughtered at the end of a brutally short life! We need better strategies to make it possible for everyone to eat less meat and more plants on a regular basis, day after day.

A few years ago, Mark Bittman, then food columnist for the New York Times, published a book titled VB6: Eat Vegan Before 6 to lose weight and restore your health… for good, along with a companion cookbook. It was published in 2013, which is also when I started thinking more before opening my mouth. I was starting to think about how I could eat less meat and more plants, so the book’s premise was appealing. I got a hold of it from the library, and decided the approach wasn’t for me. First of all, my morning meal consisted of a bowl of Shreddies cereal with cold cow’s milk – a sacred habit I was not ready to give up. Plus, as a half-marathon runner, hard-boiled eggs were the perfect post-run snack. With regards to lunch, I was often eating out and vegan options were few and far in between. Going “vegan before 6” just seemed too far out of my comfort zone. I needed a different schedule for my culinary experiments.

That’s how I decided to go vegan after 6. Dinner was fully in my control. I cooked most family meals at home every night. I crafted meal plans every Friday night before hitting the farmers’ market Saturday morning. Dinner was also the meal that was most open to experimenting. We already ate meals inspired from Italian, Indian, Thai, Mexican and all other cuisines. Two years earlier, I had started stretching the animal-based protein on our plates with beans, peas, and lentils, primarily for health reasons. The cost savings made me feel like a home economics superstar, too. My husband was on board with that. So I quietly went a step further and left the meat off our plates entirely. And he didn’t notice! (I wrote more on our family’s vegan journey elsewhere.)

The benefit of a constraint such as “vegan after 6” (or “vegan before 6” for that matter) is that it’s very clear, as opposed to the loose goal of “eating less meat.” When I was planning meals and jotting down my shopping list, I had a simple rule in mind: if it was dinner, it had to be vegan.

An unexpected side benefit was the reduction of decision fatigue. Faced with the endless possibilities that came to mind when trying to decide what to cook, I was thankful to see the field now limited to only plant-based options. (That was only a temporary advantage. About two years later, having discovered the full spectrum of vegan cuisine, deciding on dinner became a challenge again!)

Is Vegan After 6 for you?

There are some factors that will make it much easier and more accessible for you to go Vegan After 6.

Going Vegan After 6 will be a learning experience for yourself and, most likely, for the other people you cook for and/or eat with. Here are some challenges you may encounter:

What if you make a mistake? What if your Worcestershire sauce isn’t vegan? What if you break down and pull conventional pizza out of the freezer one night?

It’s ok. It’s all an experiment. Tomorrow night you can aim for Vegan After 6 again.

Is Vegan After 6 good enough?

What the world needs now is a much higher proportion of humans consuming much, much fewer animal products than they currently do. You don’t need to believe vegans’ word for it! Even very serious engineering professor Vaclav Smil – a non-vegan – has concluded that meat production destroys the biosphere while being a grossly inefficient source of nutrition for humans. (Read his Should we eat meat? book for a thorough study of the topic.)

My deepest wish is for all humans to open their eyes and hearts to the suffering caused by animal agriculture. But, in order to get there, we need to reassure them that they can survive and even thrive eating a plant-based diet. For some people, that is a drastic change from what they have grown to consider the only normal food there can be. For them, it can feel like a scary transition. Vegan after 6 makes it a manageable experiment.

Going Vegan After 6 enables more people to get a taste of nourishing new options. They can safely discover some of the benefits that come with a significant reduction in their consumption of animal products. Ideally, they’ll bring the leftovers to work as lunch, too! However, if they start a “trucker’s breakfast” habit (3 fried eggs with bacon and white toast) to make up for the lost rib dinner, a heart-to-heart conversation may be needed before open-heart surgery is required.

Take the Vegan After 6 challenge for just 2 weeks and see how it goes. If you enjoy it, repeat for another 2 weeks. Then maybe try “vegan at home.” Progressively build your confidence when it comes to eating plant-based meals outside your home, practicing looking for vegan options at restaurants. Eventually you may even feel comfortable telling your mom that you’ll bring a plant-based dish for Thanksgiving dinner. Every meal is an opportunity to make a difference.

I recommend committing to going Vegan After 6 for two weeks at first. It gives you plenty of time to experiment and learn, without being too scary.

To help you get started, I am offering this all-vegan, whole foods and plant-based meal plan that includes 10 dinner recipes, along with a shopping list and all the instructions you need. Enter your email below, read the plan carefully, and get started this coming weekend. You’ll be glad you did it. And never hesitate to reach out to ask for help, I’ll be happy to point you in the right direction. 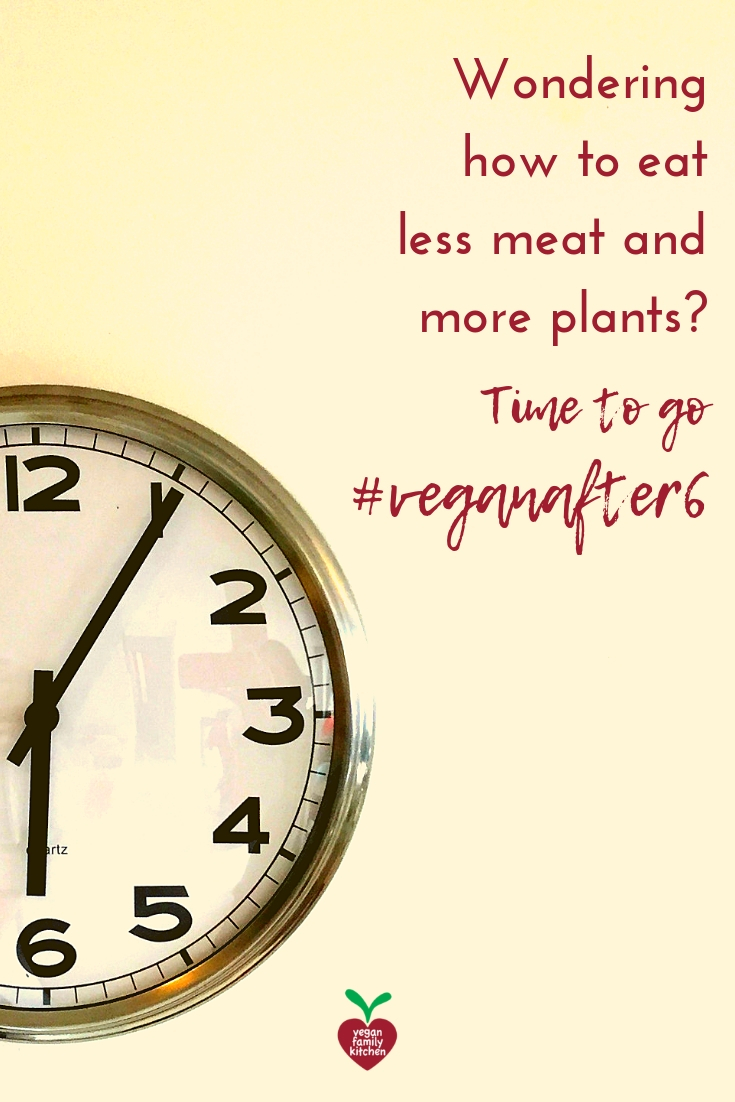