Vegan cooking for beginners: get started the easy way (even if you think you’ll never go vegan) 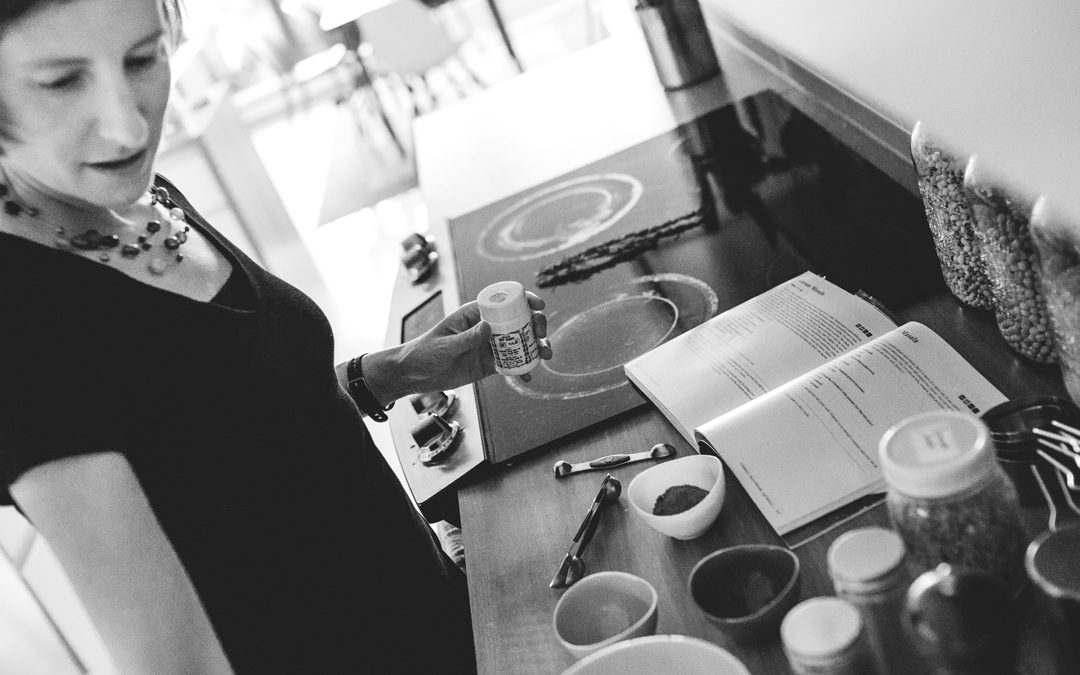 If you think you will never be vegan, I hear you and understand you. And I’m not even going to ask you to change. I was an unlikely vegan myself. I hardly knew vegetarians even existed until my late teens. When I started making money as a young adult I would splurge on fancy cheeses. As someone who was born to farmers, I thought refusing to eat animals sounded a little sentimental, and definitely not something I’d ever do myself. Letting go of eggs was nowhere on my radar, especially since all the headlines saying they had been cleared from the “do not eat” list by some health authorities. To be honest, I did not get started because I wanted to save the planet or the animals. I was just heavily pregnant and hoped that eating more beans would help me cope with some of the uncomfortable consequences of carrying a bowling ball in my tummy. (It did.) If you are just looking to diversify your diet by adding a few vegan meals, you are in the right spot. If you have already tried cooking vegan but were disappointed with the results, stick with me for a bit. I created this introduction to vegan cooking for beginners just for you.

Some vegans get their panties in a twist if you say that veganism is a “diet.” Technically speaking, yes, “vegan” does describe more than just the food one eats. Vegans are committed to avoiding the exploitation of animals as much as possible. Aside from eating animals (meat, fish) and their products (dairy, eggs, gelatin), humans use them to make clothing (leather and silk), adhesives (many glues integrate animal remains – gross I know), entertain themselves (in circuses and zoos) and test their drugs and cosmetics. This being said, don’t be intimidated by the vegan police if someone wants you to say “plant-based” instead. “Vegan food” is a perfectly correct way to describe ingredients that do not come from animals.

As for the other components of a vegan lifestyle, I certainly do not mean that those are not important things to worry about but… don’t. Not now. You do not need to “go vegan” and sew a badge to your denim jacket to reap the benefits and satisfaction of delicious, nutritious vegan food. Just start cooking with vegan ingredients at least part of the time.

Build vegan cooking into your meal planning routine. “Meatless Mondays” are a great place to start… but why stop there? Add one vegan dinner every few weeks until you’re “vegan on weeknights”. Try vegan lunches by making a big batch of this quinoa salad with black beans and mango (courtesy of the amazing Isa Chandra) and eat throughout the week. Bonus: you won’t need to worry quite as much about the nasty bacteria that breeds when eggs and dairy are left at room temperature. Opt for a “vegan start” by replacing your boxed cereal breakfast with overnight oats (from Oh She Glows) using soy or almond milk, or layering peanut butter and sliced bananas or (fresh berries!) on your toast. Vegan banana pancakes are also a great way to jumpstart your day (and can be taken along as snacks). 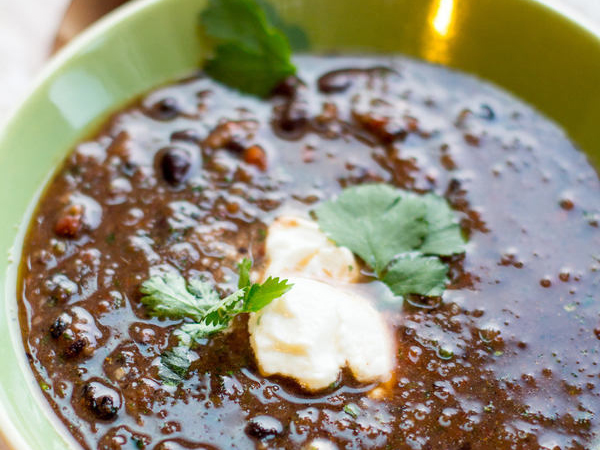 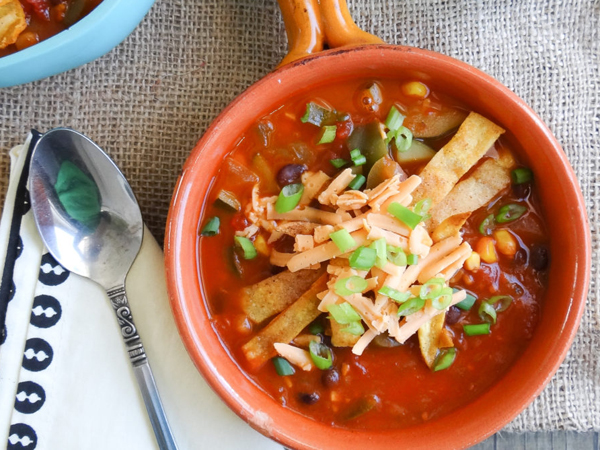 Fresh crisp apples! Guacamole! Cowboy caviar! Berries! Avocado sushi! Yam fries! Bean chili! Those are all foods that are typically vegan. Even classic pizza dough is totally vegan (until a marketing type decides to stuff it with cheese). A long list of other dishes would be vegan with a few simple substitutions, like soups using vegetable broth instead of chicken broth, or cashew milk instead of dairy milk. Substituting olive oil for butter will move many vegetable sides to the vegan-friendly list without a significant change in preparation or taste. 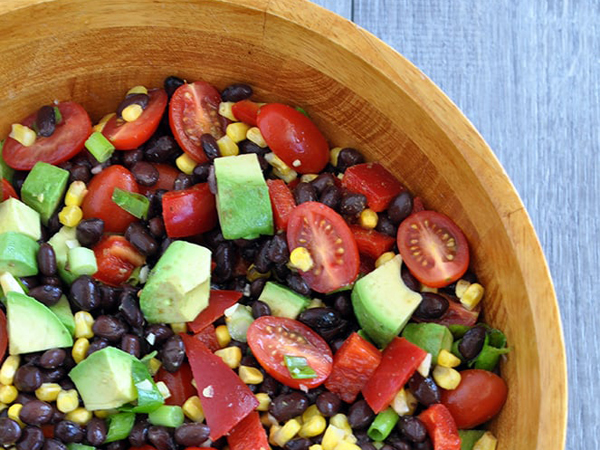 Black bean and corn salad from My Whole Food Life

Think about “additions” not “substractions”

Whenever someone mentions that vegans have a “restrictive” diet, I laugh. I eat so many more different foods today than I did five years ago! Take a stroll through the produce section of the nearest grocery store and take note of all the veggies you have never cooked at home. Time to give them space at your table, along with the fabulous range of whole grains (farro bowl anyone?), pulses (lentils, peas and beans), nuts and seeds. Inevitably, if you make space for more new and different ingredients, the share of animal products will decrease. 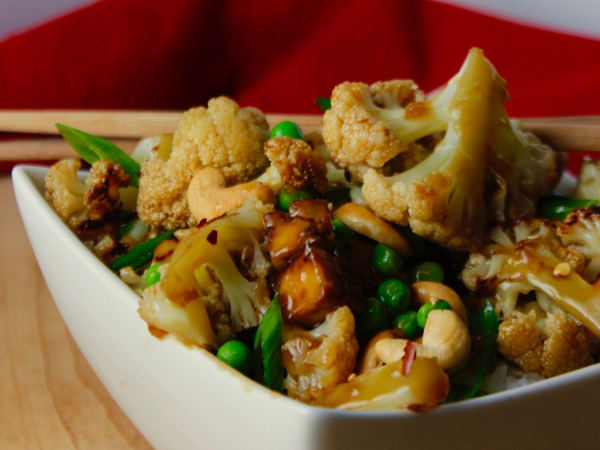 Sticky cashew cauliflower from What the heck do I eat now?

Soup tastes wonderful with vegetable broth. Eggs are redundant in banana bread: try this great recipe by Dreena Burton – I love making it as mini-muffins for my kids’ lunches. I bet you won’t notice the difference in baked good if you are using soy milk instead of cow’s.

Free yourself from the 3-part dinner

Many Westerners were raised on some version of the 3-part dinner: meat, starch and some sad vegetable. When shifting the focus from the meat to a featured vegetable chosen for its freshness (or because it’s already in the produce drawer and about to go bad…), the shape of the meal changes. You’ll find that most good vegan meals are better accommodated by a shallow bowl (or deep plate…), and knives are seldom used after chopping. Speaking of bowls, lawyer and family cook Anna Pippus offers a great tutorial about how to make vegan bowls (and why you should eat them).

I find myself cooking mostly “2 part dinners” that involve a stew or stir-fry (combining a few seasonal vegetables and a protein-dense food) on top of a starch-rich component, like baked sweet potatoes, brown rice or quinoa. I batch-cook the latter so dinner comes together in a flash. We also love “all-inclusive” soups inspired by all cultures – often including noodles. The great thing about this is that you also get fewer dishes dirty, making clean-up a breeze. 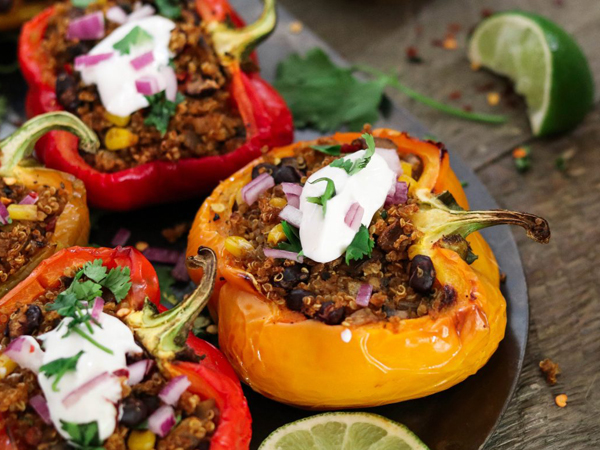 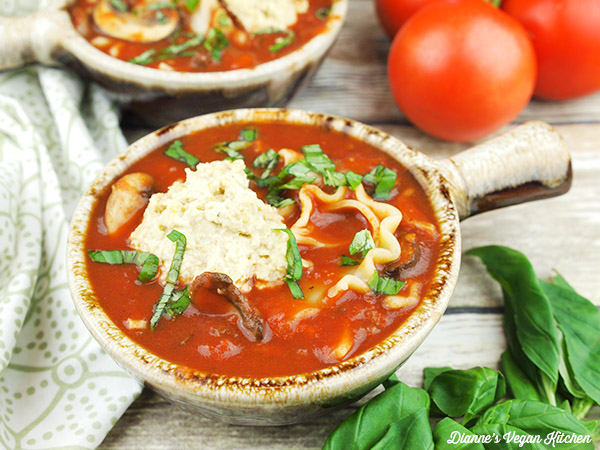 Or try this version in the Instant Pot…

It may be tempting to try to veganize a heirloom recipe that’s been in your family for a while, but I recommend parking that idea for a bit. In the best-case scenario, the results will not be quite what you had in mind, and just because it’s “different” your mind will record it as “less than.” You could also completely miss the mark and ruin some good (and pricey) ingredients. This is especially true for baking, as the chemistry of rising and binding is less forgiving than the melding of flavors in soup.

The good news is that there are thousands upon thousands of vegan and plant-based food bloggers who are developing new recipes, testing the food over and over again to get it just right, and posting drool-inducing pictures all over the Internet, notably on Instagram. You can also go straight to the most authoritative sources you can find, generally in book form. For example, Isa Chandra has a series of books on cookies, pies and cupcakes and her recipes always work. It will save you much time, effort and possibly money, and you’ll still learn by doing. 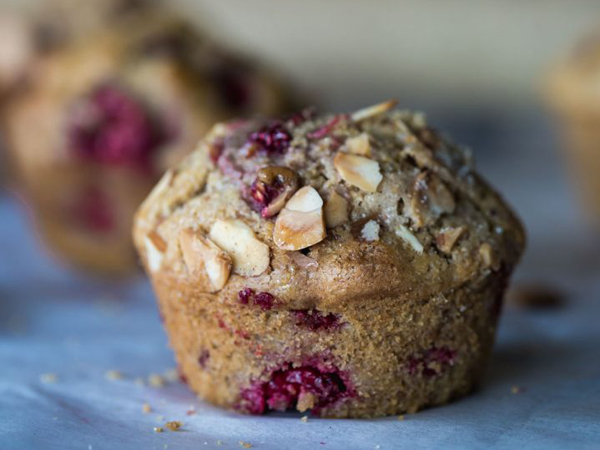 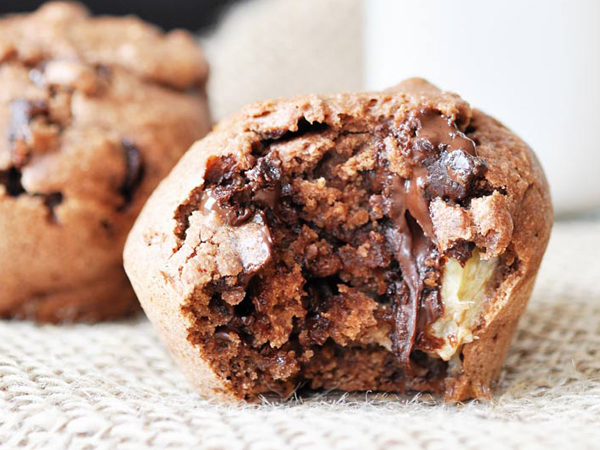 Head to the library

There are new all-vegan cookbooks published every single week and they are gorgeous. You could go broke buying them all (don’t ask me how I know). So before you invest in your own selection, head to the library, check out a few and read through their introductory chapters. It will give you a good feeling for the author’s approach before you commit your time and ingredients to cooking by their recipes. You might also learn about ingredients you didn’t even knew existed but that aren’t even that weird, such as nutritional yeast flakes and aquafaba. 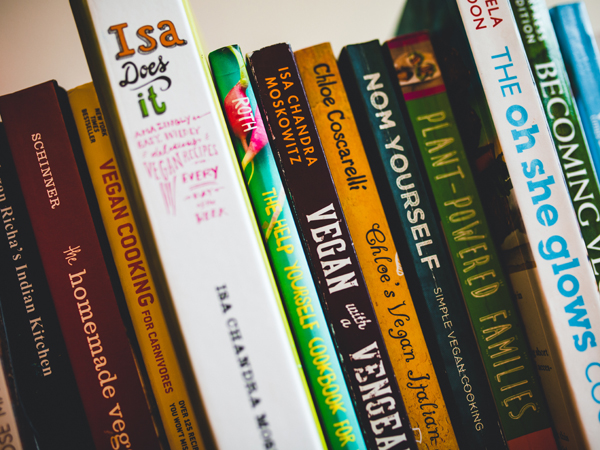 In many parts of the world, meat and dairy are more expensive, less available, and simply not as prevalent as they are in North America. Asian cuisine includes many fabulous tofu dishes, and Indian food makes the most of beans, peas and lentils. While you are captivated by the discovery of new flavors and aromas, you are less likely to notice the absence of meat, dairy and eggs.

Got a love affair with Italian pasta? Get ready to be blown away by Chloe Coscarelli‘s food. 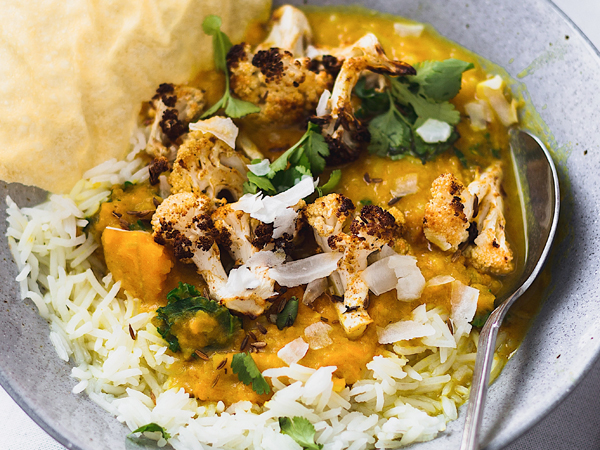 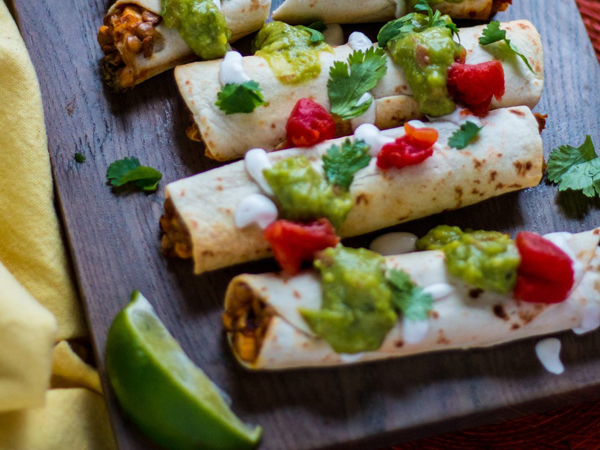 If you decide to go further into your veg* journey, make mindful choices. Often, people who go vegetarian (as opposed to vegan) replace a lot of the meat in their diet with eggs and cheese. The problem is that cheese is a really hard habit to kick. Instead of keeping dairy for last, progressively replace meat, fish, dairy and eggs, all at the same time. It will prevent you from getting stuck at one stage or another.

There are now tons of vegan meat substitutes in supermarkets but I personally prefer cooking with ingredients rather than using processed food that has a list of ingredients. (I do indulge in some Gardein fishless sticks every blue moon…) Sticking with whole foods will keep your nutrients up and your grocery bill down. And who doesn’t like a hot plate of spaghetti with a rich and flavorful sauce? 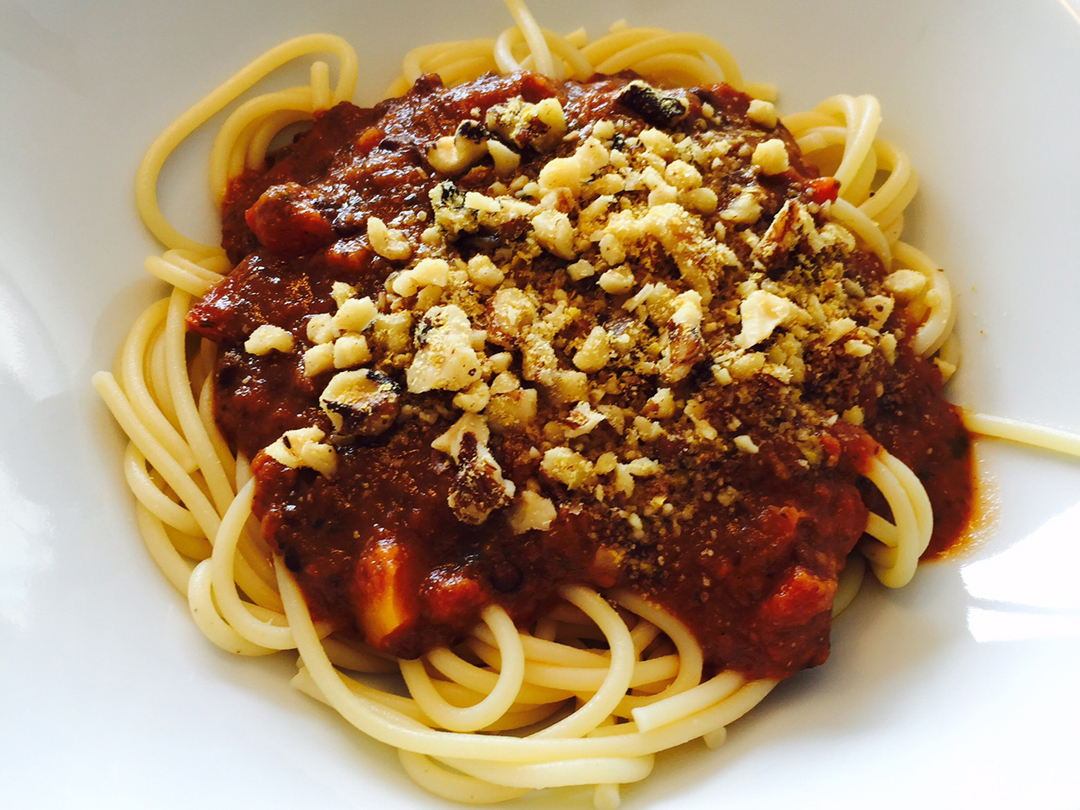 Sadly, many people have preconceived notions about vegans and vegan food. Hearing the V word will immediately taint their perception of a dish (before even tasting it). Don’t cause more trouble for yourself than you need to and keep grand declarations until you are ready to make them – and face the barrage of questions from your friends who are nutrition “experts” or plant advocates.

If anyone asks, just tell them it’s a “2-bean beer chili“. If anyone notices that you are now doing Meatless Mondays, Wednesdays and Fridays, it’s fine to say you are just trying to eat healthier food.

Do not fear tofu

Tofu is not a “meat substitute.” It is a thing of its own that’s been around for 2000 years. Once you are more comfortable in your new identity as a veg-friendly cook, you can try these amazing dishes.

And, no, it will not cause you health problems, whether you are a woman or a man. 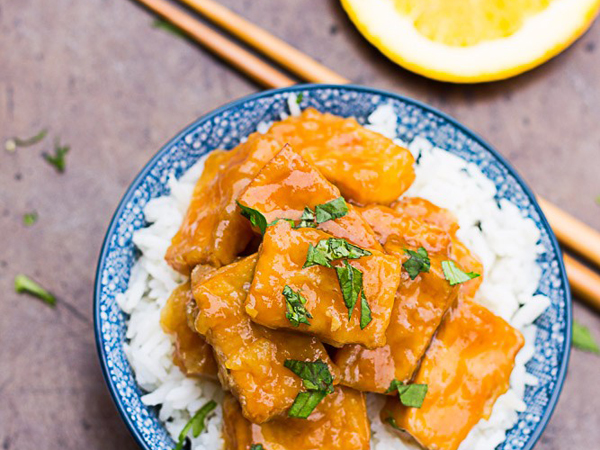 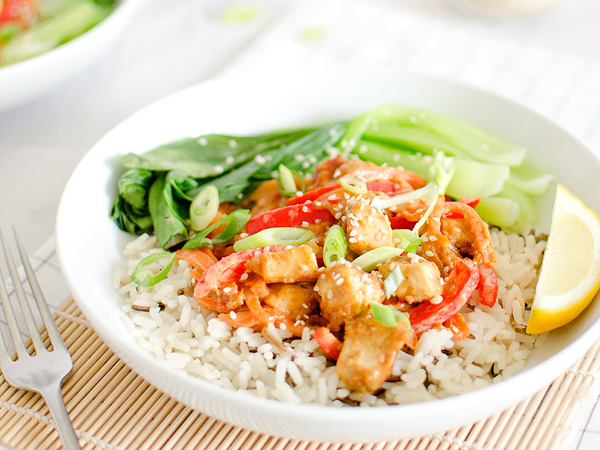 If you are curious about health and nutrition, make sure to visit Dr. Michael Greger (author of the book How Not to Die) at nutritionfacts.org – an entirely sponsor-free source of evidence-based information about how our bodies deal with food.

If you want a quick introduction to the environmental impact of the food you eat, in an entertaining documentary format, look for Cowspiracy (available on Netflix). (Disclaimer: some of the figures presented are of the “back of the envelope calculation” type; nevertheless, the general picture and order of magnitude are right.)

If you wonder where your (non-vegan) food comes from, watching the documentary Earthlings (easy to find online) narrated by Joaquin Phoenix will leave a strong impression.

If you struggle with the “what’s for dinner?” question, I’ll be thrilled to help. You can use one of my fill-in-the-blanks meal plan templates or download two weeks’ worth of family-friendly vegan dinner recipes. Or just write to me with any question you may have.

See you in the kitchen! 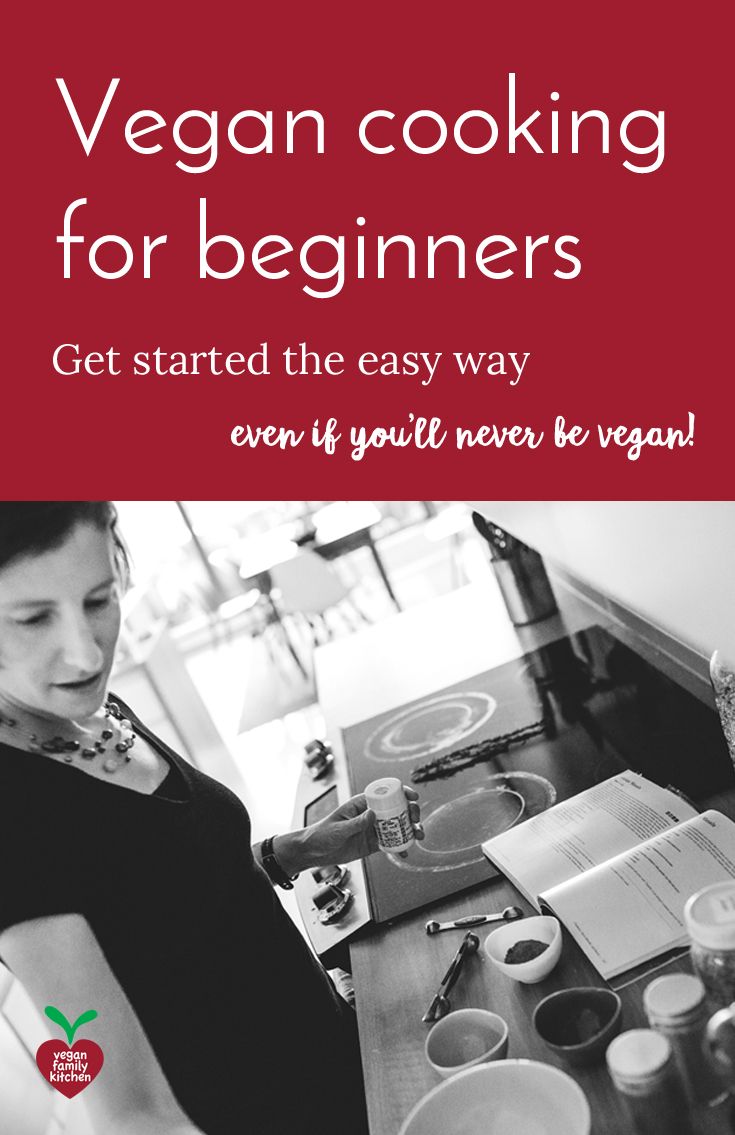