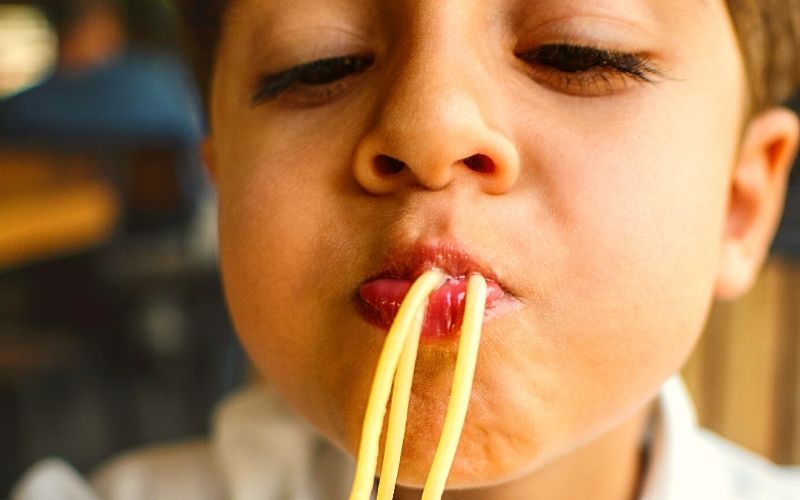 I often get asked for dinner ideas for picky eaters or “good vegan food for kids.” I disagree that there is any kind of specifically kid-friendly plant-based food, because every family has its own food history and different styles of cooking and foods will work best for different children (and adults!).

Here is a story about living with picky eaters and helping them thrive. Although I have many stories from friends and clients alike, I also have plenty of first-hand experience to draw from. I would love to know about your own experiences, too, so please feel welcome to share a little in the comments if you don’t mind.

You can listen to a very similar version of this article on the podcast or keep reading below the player:

My son not infrequently has plain pasta for dinner. So what?

From the day my daughter started eating solids, she had a wonderfully diverse palate. She particularly appreciated curried dishes and did not shy away from any vegetable. I was pretty proud about it… but I shouldn’t have bragged, ’cause I jinxed it.

At 18 months, she started attending a daycare where meals were provided. I thought the menu would be right down her alley — lots of vegetable soups and stews — but what happened was the exact opposite of what I predicted: she became the pickiest eater. Was the food bad? Did she learn from the other kids that ingredients become poisonous when combined into a single dish? Was it just a developmental coincidence? I’ll never know the cause, but the consequence was clear: she became wary of “foods that touch” and cut dozens of previously-OK ingredients off from her green list.

When her little brother came along she apparently taught him the ropes. He is her biggest fan in the entire world and worships the ground she walks on, so he likely took some food cues from her. The master was soon surpassed by the student; my son earned a “world’s pickiest eater” badge. He is currently in his worse phase. 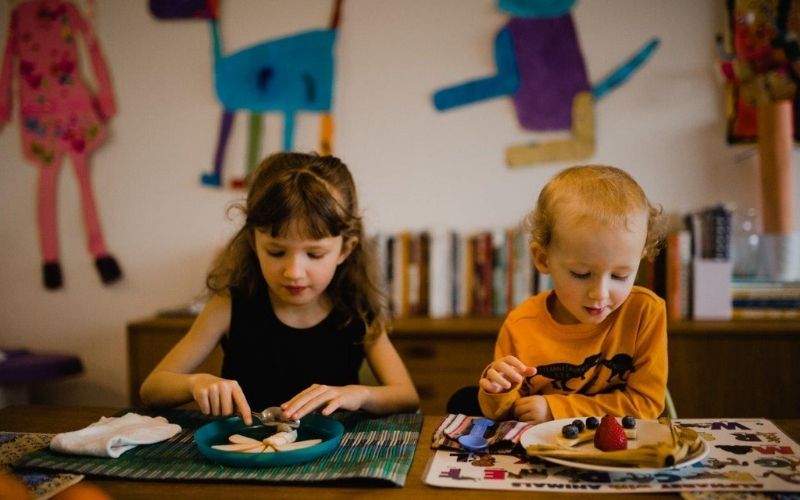 Awwwwwh, they have grown so much since this picture was taken. But they still love fruit the best!

Here’s an inventory of foods he highly approves of as we approach his seventh birthday:

He used to love quinoa but that fell out of favor recently, as did my home-made seitan, which he loved in the past. Thankfully, he does strongly supports the idea of “taco Tuesday” and will garnish his (flour) tortilla with white rice, a few black beans, and crumbled tortilla chips. Don’t ruin it with salsa!

He will devour practically every fruit that grows under the sun, including Grand-maman’s cherry tomatoes. Occasionally will nibble on peanuts or olives.

And, somewhat miraculously, he enjoys my whole-everything blender waffles for breakfast every day — perhaps because of the chocolate sauce? (The flip side is that he will not eat a conventional pancake or waffle.)

No soups, no stews, no stir-fries, no simmered grain dishes.

Just plain ingredients that, as much as possible, don’t touch.

On the other hand, my daughter is now 10 years old and slowly opening her mind up to a broader range of foods again. She is enamored with unlikely things like some mushrooms, mussels, artichokes, risotto (but only with one specific brand of arborio rice), and nopales (cactus). She has regained an appreciation of curried red lentil soup and black bean stew. Recently she discovered pad thai. But unless I plan dinner with her in mind specifically, her odds of eating the meal “as is” (the adult version) are quite low. She is curious and will have a bite, but prefers to eat her own meal deconstructed: grains here, beans there, sometimes a bite or two of some vegetable. Preferably no sauce or dressing, unless it’s kimchi or sauerkraut. Go figure.

Does that mean that I cook two (or three!) meals every night? No!

Are we the grown-ups eating such a limited diet? Certainly not!

My husband and I love our plant-based diet of whole foods, including tons of vegetables, and aren’t going to abandon pesto just because it’s green.

Most of the time, I cook following my Vegan Meal Plans and I am able to deconstruct dinner, putting aside pieces of raw or steamed vegetables, and unseasoned beans and grains for the kids. I also always have bits and pieces left of previous meals in the fridge, and I can assemble those into something like a complete meal. Occasionally, I make a big batch of lentil soup my daughter likes and I can reheat a little bowl of it for her.

Sometimes I’m not perfectly organized and my son ends up eating plain pasta for dinner. He is perfectly happy with that. Me? Not so much!

But that’s not a reason to ruin our family meal and precious time together by stressing about it and creating a tense atmosphere at the dinner table. I figure that the most important thing for us at this age is to bolster a positive attitude toward meals in general, to enjoy a pleasant moment as a family, and to let our kids learn by example as they see what we eat, and how much we appreciate it for both its gustatory and nutritional qualities.

In addition, I am somewhat reassured that my son has at least a solid base from his wholesome breakfast and abundant intake of fruit, plus a few legumes.

Both kids are growing and thriving, have plenty of energy, and no warning signs of disease whatsoever. I also remember that, when I was their age, I could eat hot dogs every single day at lunch — my mom was too busy to argue — and somehow grew up to become a health-inclined foodie who’ll eat anything from the plant or fungus kingdoms. I am hoping that over time my daughter continues to explore a growing range of foods, and my son will want to emulate her as he ages, too. I continue to offer both of them ridiculously small portions of the foods we adults have for dinner — with the expectation that it’ll be the last bite I take after my own dinner is done. I know that they’ll get there in their own time.

Interested in going deeper into the topic of meal planning and supporting highly selective (picky) eaters? You may want to check out my workshop: Feed Picky Eaters with Love.