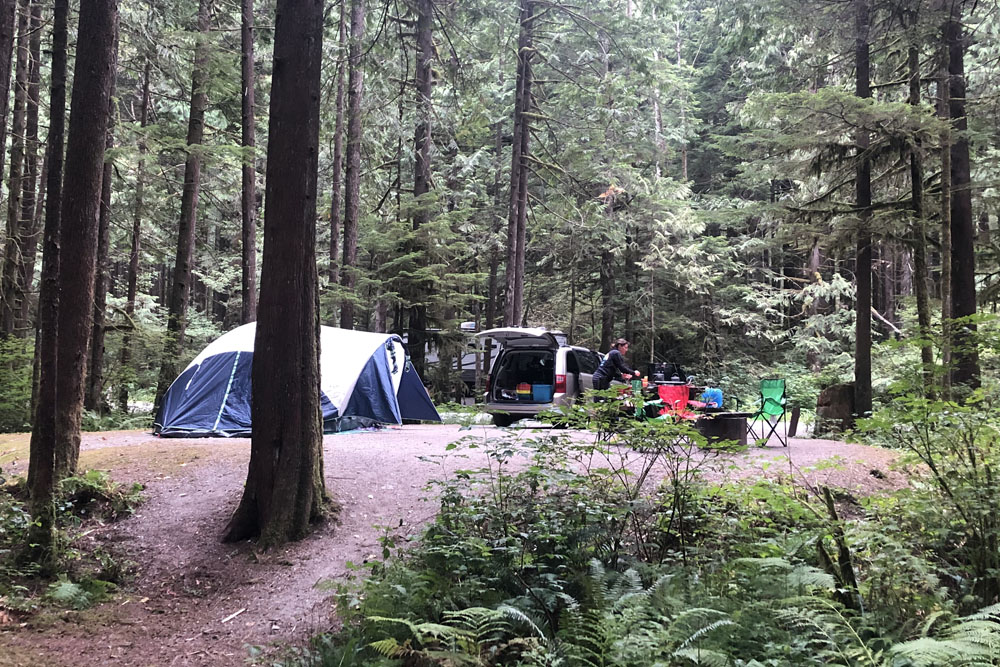 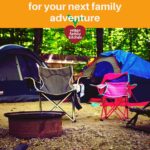 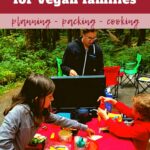 Our children are now 8 and 5. It took my husband and I this long to build up the courage to attempt sleeping in a tent in their company. For our first long-weekend adventure, we picked a nearby destination – Golden Ears Provincial Park – and Labor Day weekend, hoping for some good weather. I am pleased to report that we all survived to tell the tale, and that we ate quite well throughout the weekend. In this blog post, I will tell you what vegan camping food I packed and how I got organized to cook it.

My goal was to avoid spending more than a few minutes putting each meal together. I know some people who enjoy camp cooking, but I didn’t want to do significant chopping or bring spices. Still, I wanted to continue eating delicious home-cooked food, using mostly whole ingredients. So my vegan camping food strategy was to plan and prep ahead.

Keep in mind: this was car camping. We even rented a minivan to have more carrying capacity than we do in our small car. Very little of what I share here would be applicable to a backcountry adventure (something Zoe Peled covers in greater detail here) or bike touring. But if you’re going car camping for three nights, this vegan camping food strategy should help.

Plan all the meals

Our first camping trip was not going to be the weekend when I went freestyle in the (camp) kitchen. So I made a detailed plan of everything we’d eat and generated grocery and packing lists from there. 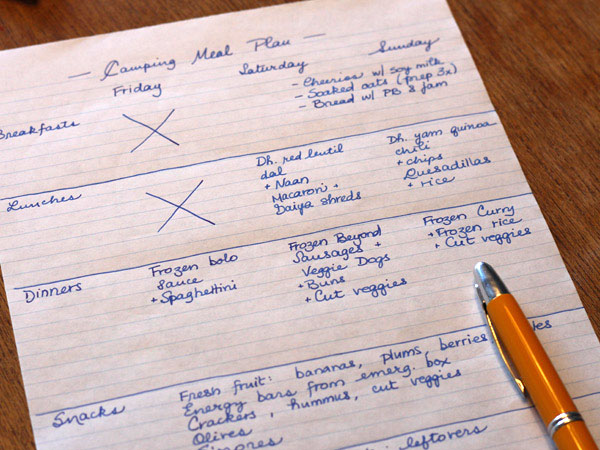 Note that for some meals there is a second option, as my son is still working on broadening his range of acceptable foods.

We would be at camp for three dinners, including the first night when we’d be arriving almost at dusk and would also have to set up camp and get organized. I planned three very simple meals:

There are no pictures of our dinners, but you have to trust me that it was all delicious! My husband protested a bit at the Beyond sausages because he prefers to avoid processed food, but he admitted that they were pretty damn tasty. (Pro tip: I boiled them in water first before “grilling” them in my tiny camping skillet. The boiling seemed to take away much of the greasiness and also made sure they were warm throughout. We didn’t have enough of a fire to grill the sausages on it.) 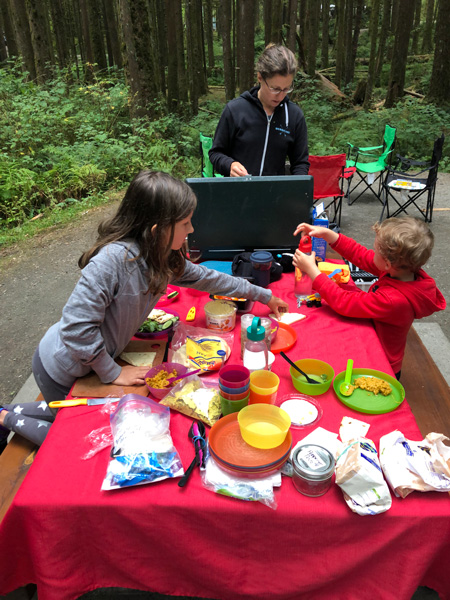 My camp kitchen (and assistants). Things got a bit messy, but cleanup never took more than 10 minutes!

I ate the oats for breakfast with a few pieces of fruit thrown in. It was so good, perhaps in part thanks to the beauty of having a solitary breakfast out in the forest while my kids were playing quietly. My husband isn’t a breakfast man. He stuck to coffee and fruit, while the kids had their yogurts as well as toast and fruit depending on the day. I lightly grilled the bread in the skillet and they were happy with that. (We didn’t start a fire until the afternoon.)

The soaked (“overnight”) oats took a lot of space and were packed in glass, which was fine for car camping, but not what I would have done for a hike-in sleepover. In that case, I would have pre-soaked the oats a few days ahead and dehydrated them for a lighter, non-breakable option. 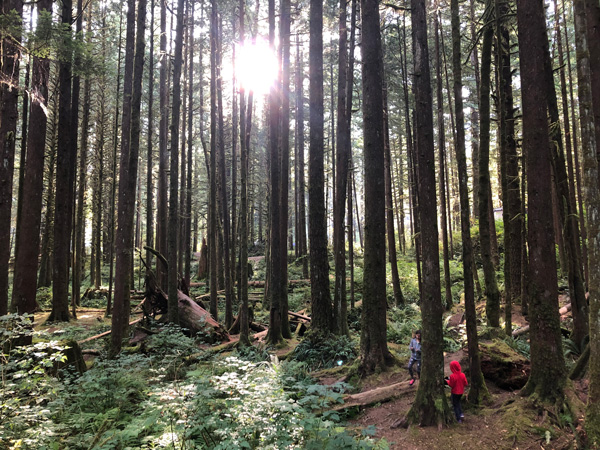 Oh, where did the kids go? Playing in the woods is a great way to build up an appetite.

At home, lunch is usually an after thought for me. I plan dinners quite carefully, and I love my breakfasts, but for lunch we mostly eat leftovers or some combination of whatever we can find in the fridge. For vegan camping food, though, without the option of going to the store if we needed something else, I wanted a plan. Or two.

Plan A for lunches was to rehydrate home-made vegan dehydrated meals from our emergency preparedness kit. Throughout the year, I dehydrate leftovers of various chilis and curries and save in vacuum-sealed bags for emergency purposes. My reasoning is that, if we go camping once or twice a year, it gives me an opportunity to refresh my stash. Until this past weekend, I hadn’t tested the food, so I also needed a plan B. 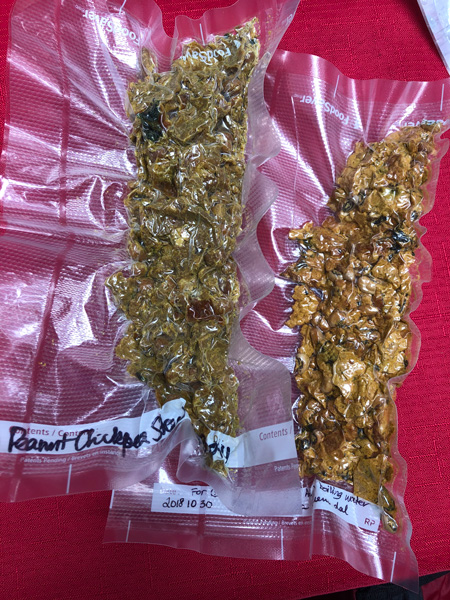 Two of my dehydrated vegan meals from leftovers. The color of the dish on the left wasn’t very inspiring but it turned out as-good-as-fresh when rehydrated.

Plan B was to eat pasta with veggies and/or leftovers from the frozen dinners. I also brought a couple of packages of tofu I would be able to dice and sauté, and I knew there would be leftover veggie dog sausages if the situation got desperate.

Plan A turned out to be a success! I eyeballed the amount of water required based on the number of portions I had marked on the sealed packets, poured in the dehydrated vegan camping food, and gently reheated on the camp stove for five to ten minutes, stirring occasionally. We had red lentil dal and an African peanut and chickpea stew, combined with some of the reheated rice. My daughter, who loves dal, had multiple helpings. I knew my son wouldn’t be into that meal, however, so I also boiled some macaroni for him. With a handful of Daiya cheesy shreds, he was absolutely content. 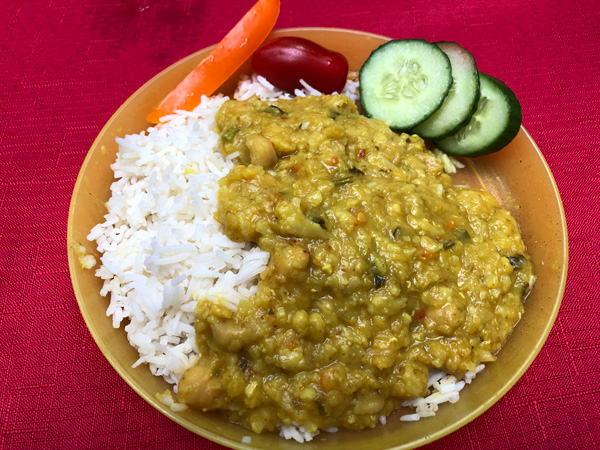 Here’s the rehydrated peanut chickpea stew. The flavor was super rich and the mouthfeel perfectly creamy. No-one could have told it had been previously dehydrated for over a year!

We also snacked on the cut veggies and hummus at lunch time.

I packed way more snacks than we actually ate, as an insurance policy. I made sure to leave them in the trunk of the minivan and to only pull some out strategically at snack time, so the kids would still have an appetite for meals. Here’s what I had brought along:

The one snack/lunch item I really wish I had brought, but which is currently unavailable due to production issues in our area, was smoked tofu. If you can get your hands on some, make sure to pack it to round up your vegan camping food buffet.

I don’t mind cooking, but I didn’t want to be packing a bunch of raw ingredients and multiple containers for seasonings. Fresh produce takes a ton of space, especially leafy greens, and I preferred not to have to pack those, but I also didn’t want to just be eating beans and rice for three days. Prepping the food ahead took no time at all because I just doubled up on existing meals and preserved the extra with dehydrating and freezing. Basic chopping also helped.

Two of the meals (our lunches) were dehydrated in our home dehydrator… over a year ago. When I make more chili, curry, or some other stew than we have an appetite for, I dehydrate them by spreading the mixture thinly on my silicone-lined dehydrator trays. After a few hours, they are dried to a crisp and I seal them up in vacuum-sealed plastic bags for storage in our emergency preparedness kit. I talk more about this in my blog post: Should I buy a dehydrator? A vegan viewpoint. Now that I have tested the food – some of which was almost two years old! – I am convinced that this is a good strategy and I will be dehydrating leftovers more regularly in the future. It also worked great to bring fruit like bananas and watermelon.

This would be the perfect approach to prepare vegan camping food for backcountry adventures.

Next time we go car camping or even to the cottage, I will adopt the same strategy: pre-cook and freeze some yummy vegan camping food at home. The frozen food doubles up as an ice pack in the cooler, too. The biggest challenge is to get portions sized right, because leftovers are harder to manage in the woods than at home.

I pre-cut two medium containers’ worth of raw veggies to eat as a side with meals, including: carrots, radishes, and bell peppers. I also brought an English cucumber, leftover mixed greens from our CSA box, and lots of cherry tomatoes. Unexpectedly, my daughter (who normally doesn’t volunteer to eat greens…) decided to make herself a salad! Camping takes people away from their normal environment, perhaps encouraging them to experiment with new foods… 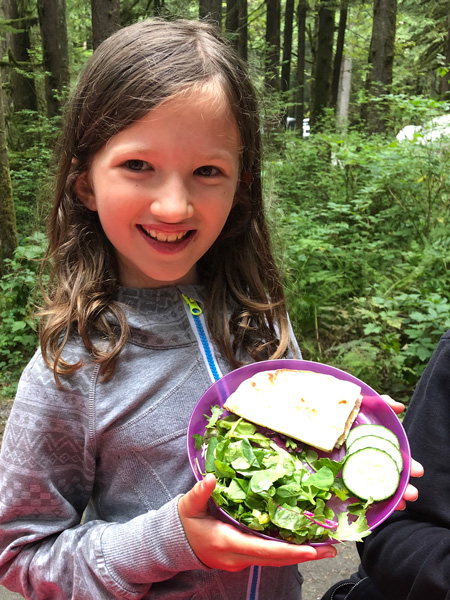 My daughter decided to prepare salads for everyone, and ate her whole plate. Camping made her more adventurous!

Despite the relative simplicity of our meals, we still had to pack a number of items to cook and serve them up. Here’s what we brought:

The cold and frozen foods were packed in a large plastic cooler with two bags of ice. We also had one big shopping bag full of various meal-planned dry foods and another bag of snacks. Additionally, we had a small soft-sided cooler for the fresh fruit and veggies.

Cooking meals was a breeze: start the propane camping stove elements and gently reheat whatever we were having then, while crudités and hummus were available on the table for snacking.

I decided against using the fire pit to cook anything. It was quite humid while we were at the park and the firewood we bought was not perfectly dry, so it required a copious amount of chemical fire starter to get going… and even then, it wasn’t much of a fire. The fire starter cubes contain kerosene (among other additives) that make it unsafe to cook food until the cubes are fully consumed, which can take 20 minutes or more. We started the fire at dinner time and by the time we were ready for s’more over an hour later I figured the toxic fumes had dissipated. But I don’t know if I’ll do that again.

After I was done cooking, I’d fill a pot with fresh water and bring it to a boil. Mixed with some cool water and biodegradable soap, it was perfect for washing dishes. (You can read more tips on dishwashing in the outdoors, including “dry cleaning,” here.)

When camping, remember to be wildlife friendly by removing all food residues from your plates before washing, and filtering the dishwater before dumping it, preferably away from your campground. The food bits left behind attract wildlife, which is not only dangerous for you (care for a bear visit in the night?) but also terrible for the animals. Indeed, bears and other wild animals habituated to human food will likely be tracked and put down by “conservation” officers. So make sure to dispose of the food residue in a bear-proof dumpster or canister, or lock it up in your car overnight. 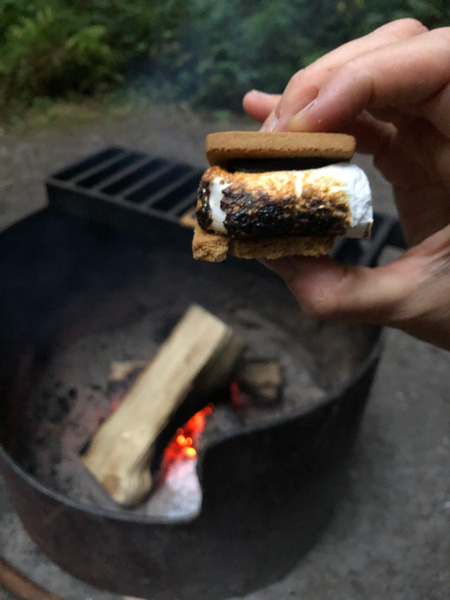 What better way to end the day in the woods?

What if it rains?

There was no rain in the forecast for our family camping long weekend, and thank goodness the forecast was accurate! If there is any chance of rain however you have to be prepared for it. A shelter to pitch over the picnic table would be ideal. In our case, if we were surprised by a shower, I would have cooked in the open trunk of the minivan and brought the food into the tent to eat. Whatever you do, never, ever operate a camp stove inside your tent, however well ventilated you think it is.

What’s your favorite thing to eat while camping?