Should I buy a dehydrator? A vegan view point (with recipes and tips!) 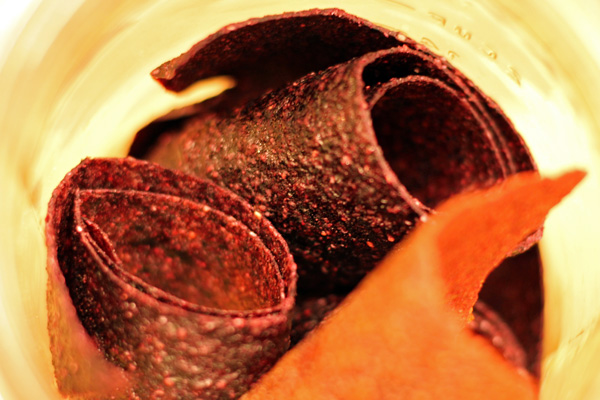 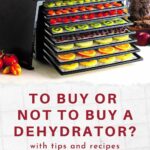 It is peak harvest time and we can’t possibly eat all the magnificent produce that is picked at the moment. You may be asking yourself: “Should I buy a dehydrator? I could make so many awesome vegan snacks!” You are right. But there are also some significant downsides to owning a dehydrator. I myself have purchased a second-hand 9-tray Excalibur about two years ago, and I (mostly) love it, although sometimes I have second thoughts. In this post, I will talk about how I went about buying a dehydrator, what I use it for as a vegan, and whether I would do it again. I have asked a few other vegans for their insight, too, and some have generously shared recipes for you to try… if you decide to go ahead and buy a dehydrator.

This post does NOT contain affiliate links. I will NOT make a commission if you buy a dehydrator or anything else. I strongly believe that most people have enough and do not actually need more stuff in their lives… and if they do, those items can almost certainly be procured second-hand from a relative, friend, thrift store, or classified ads such as Craigslist.org or Facebook Marketplace. In the case of dehydrators, they are common finds on the used market… which should give you a hint that they aren’t a good fit for everyone. Read on!

What dehydrator to buy?

My first dehydrator was an impulse purchase at a thrift store. It was a model with round stackable trays. I immediately filled it with banana and strawberry slices upon coming home. It turned out to be a dud: there was no temperature control (and it seemed to be running very hot), I didn’t like the circular trays that made it hard to make fruit roll-ups without special parchment sheets I would have to order online, and it was extremely noisy. But the kids gobbled down those first dried strawberries and asked for more, so I started researching my options.

I knew I wanted a rectangular dehydrator with slide-in trays, and based on reviews I though I should go for a bigger model. Only a couple of leaves of kale would fit in the smaller units!

A friend owned an Excalibur dehydrator with 9 trays – the model I was thinking of buying – so I asked her to give me a demonstration. I was concerned about noise. Well, it was a bit noisier than I would have hoped (albeit not as loud as that thrifted one!) but she offered to sell it to me for less than half what she had paid for because it was gathering dust in her closet. I quickly accepted and loaded the Excalibur in the trunk of my car before she changed her mind! 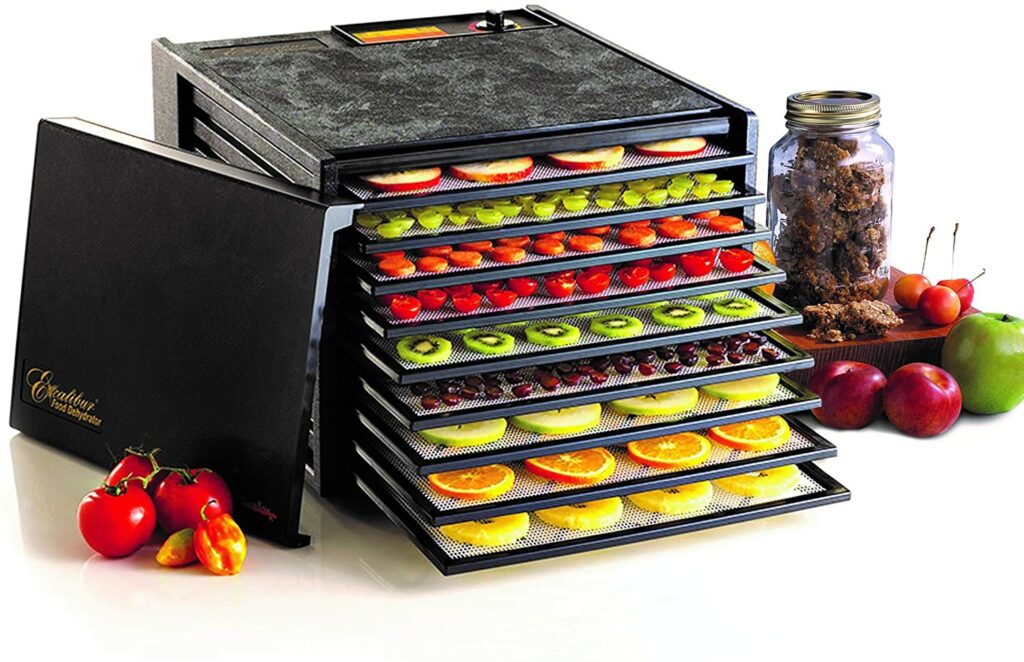 If I was to do it again, I would choose the Excalibur 9-tray in a heartbeat. The square trays are practical, the temp control and fan are important features, and there’s room for a lot of food in there. Jessica, another vegan mom in my neighborhood, bought the Excalibur 5-tray, and regretted not going bigger: ” I did a lot of research and ended up with a 5 tray Excalibur. Within a few weeks I realized I should have gotten the 9 tray, with a clear window – because who doesn’t peak?!” But a smaller unit may be sufficient for a single person or a couple. Karina Inkster, fitness coach extraordinaire known for her frank-speaking vegan podcast, is very satisfied with her 6-tray Aroma model. “It’s been fantastic for many years, so I’d definitely recommend it. Great price, great functionality, no issues.” But keep your eyes peeled, because you may find Karina’s unit on Craigslist sometime soon: “Now that I make fruit leather so often, I would love a 12-tray dehydrator instead of 6 trays!” 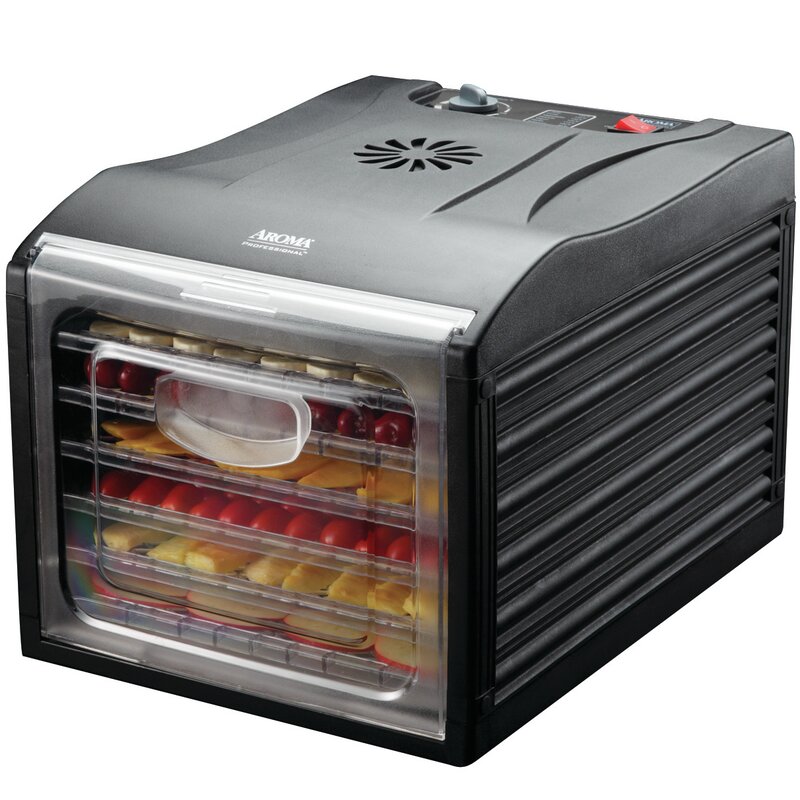 Excalibur also makes a model with stainless steel mesh trays. As much as I dislike plastic, it would not be worth the higher price tag for me, because as an exclusive plant eater I only need to operate my dehydrator at a low temperature (rarely over 125 degrees Fahrenheit). At such a setting, I am not concerned about plastic leaching into my food.

Round models such as those by Nesco and Salton are not necessarily bad. They are far less expensive than the box ones, and easier to store out of the way. If you choose to go down that route, make sure to get one with a temperature regulator, otherwise you’ll be stuck at the preset (which tends to be approximately 160 degrees Fahrenheit – too hot for many delicate ingredients). You’ll definitely want to pay extra for the custom-cut silicone sheets in order to maximize your investment, and possibly buy a few extra stackable trays as well.

Where is the best place to put the dehydrator?

At the same time as you are asking “should I buy a dehydrator?” you have to ask “where will I put the thing?” If you don’t find the right spot in your home, your affair with the dehydrator might end up being quite short. Here are some considerations you should keep in mind:

I have seen pictures of dehydrators on top of the fridge… but that seems like a good way to spill food. Plus, some refrigerators get really hot on top, which may damage your appliance.

Our galley kitchen isn’t huge, but the addition of a peninsula four years ago left me with an empty cabinet without a door. At first, I was going to put seldom-used cookbooks, but then the dehydrator came and fit right into the empty spot. There is plenty of space around the appliance, and no door, so it is reasonably vented. And there is an outlet right outside. I see the dehydrator every day and it prompts me to use it to save leftovers for our emergency kit.

If you have a large walk-in pantry immediately next to your kitchen, it might be the best place for your dehydrator. I’m jealous.

What vegan food is best suited for dehydrating? 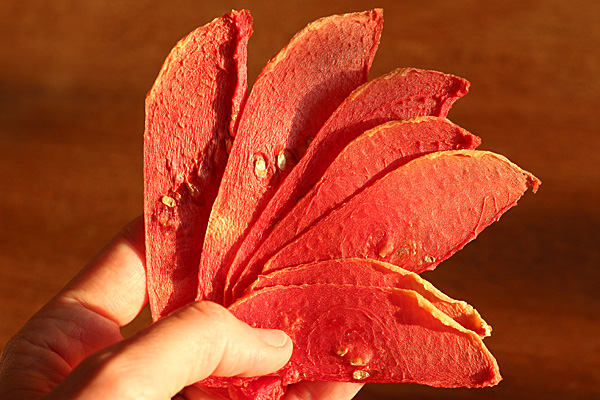 I didn’t know what was missing from my life until I dehydrated watermelon slices for the first time. SO good!! 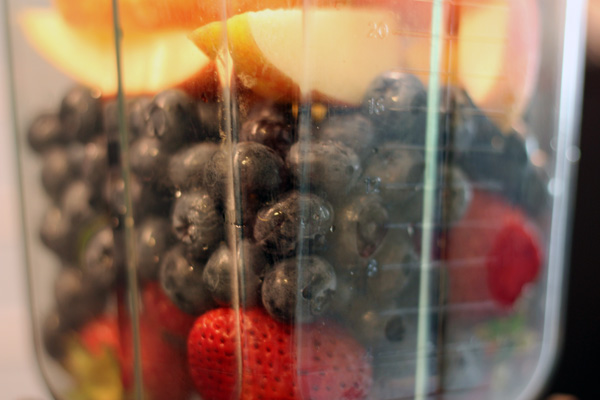 First, add your fruit to the blender. Include a pectin-rich fruit, like apple. 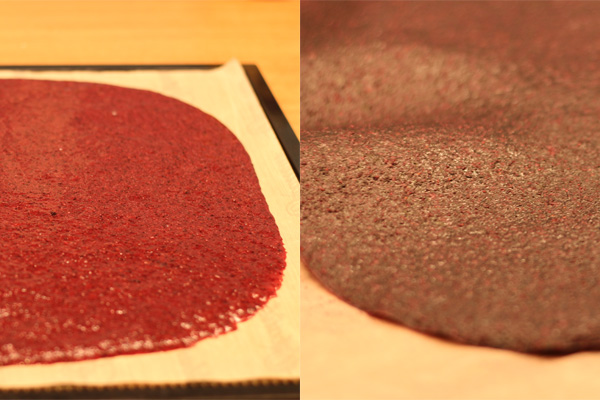 Before and after: Pour on a silicone-lined tray and spread to about 1/4 inch thick. Dehydrate for 4-12 hours, checking once in a while.

Roll it all up and save in an airtight container away from direct sunlight. If not eating within the month, consider freezing.

Pizza crackers from the Vegan Dollhouse 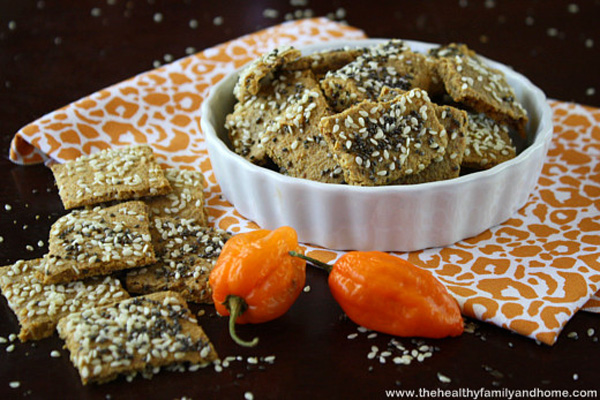 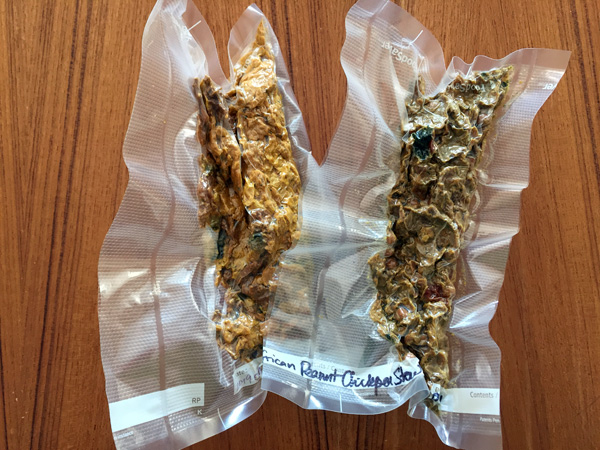 Aside from food, the dehydrator is great to dry out crafts when your kids poured too much glue and books that have inadvertently gone for a swim.

How long will vegan food need to dehydrate for?

How long you need to dehydrate your vegan food for depends on so many factors, starting with the humidity content of your food, the thickness of the pieces, the temperature, and the ambient humidity. I live on the Wet Coast so dehydrating foods in the winter can take twice as long as some recipes suggest. Keep on experimenting.

You’ll know it’s done and safe to store at room temperature when the food is completely crisp, but not everyone likes their food to be that dry. If you’d rather keep your fruit a bit more chewy, you should probably keep your bounty in the refrigerator or freezer, in an airtight container.

Some people are intolerant to raw fruit – and that’s a really sad thing, because they’re stuck with eating only soft, cooked fruit. Unless, like coach Karina, they have a dehydrator: “I’m severely allergic to raw fruit, so I have to cook it all before I eat it. So that I don’t have to rely only on cooked fruit mush, often I’ll bake apple slices to heat them through, then dehydrate them for delicious and chewy treats. I also often make fruit leather.”

If you manage to get to those delicious dehydrated bits before your kids, you’ll have to store the bounty for later. For most of it, I use airtight Mason jars (with the metal lids, as the plastic lids let air seep through). If its going to be kept for more than a month or two, then I freeze. For my emergency food supply (see above), I use a vacuum packing machine.

A few days after storing, inspect the food and containers. If there is any sign of moisture, you have to put it back in the dehydrator, or consume immediately.

Before consuming, always inspect the food visually and by smelling. If there are any signs of mold or rot, throw it all away. (Sorry! But it’s not worth it.) 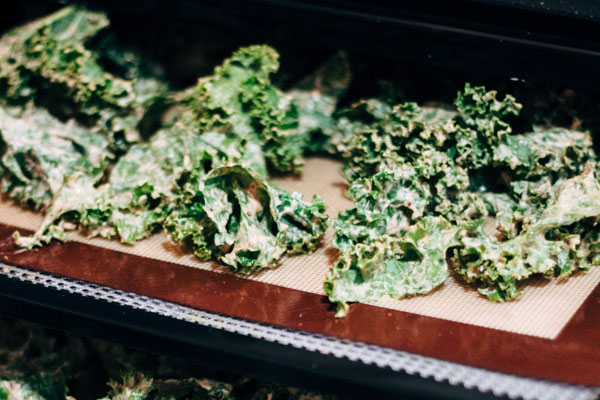 Vegan dehydrating is a pretty small niche, and unfortunately there are few vegan-specific resources to help you master this tool. 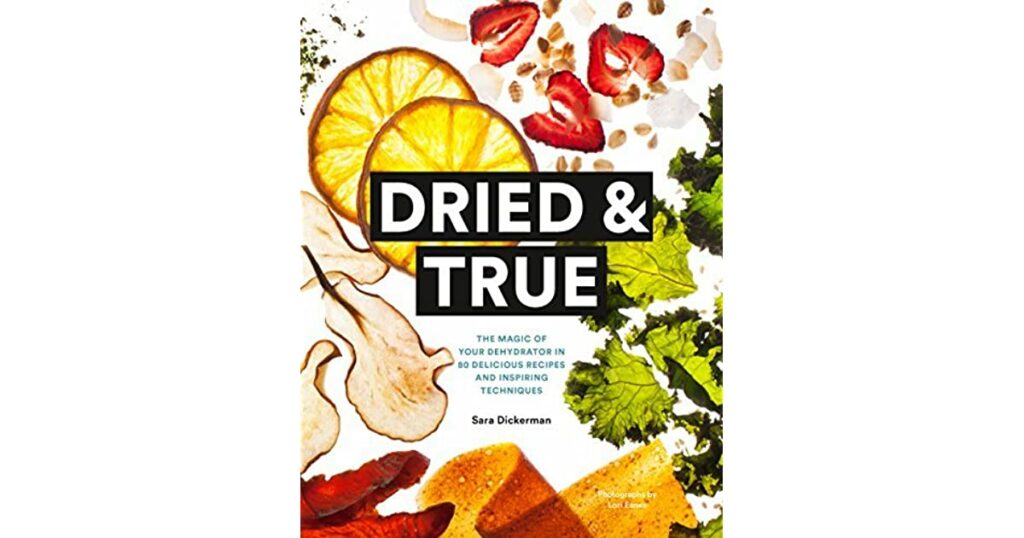 Bottom line: to buy or not to buy a dehydrator? A vegan’s perspective.

If you have a good spot to put it, and the funds to buy one, I’d say buying a dehydrator is a good idea for a vegan. On my priority list for small kitchen appliances, it would come in fourth or fifth position. My top 1 and 2 are a high-power blender and a solid food processor. Then there’s the electric pressure cooker (Instant Pot). I think the dehydrator would come before the stand mixer (but that might be because I don’t bake much). I do not have an opinion on air fryers yet, but those would certainly compete with the dehydrator for space.

I find that dehydrated fruit and roll-ups are a fantastic way to round up lunchboxes and packable snacks for the kids, without creating a mess.

And the capacity to create home-made crackers from leftover plant milk pulp (without firing up the oven) matters a great deal to me. I love home-made soy milk, but if I didn’t have an outlet to use the leftover fiber, I don’t think I would make it quite as often.

I should add that it is possible to dehydrate your food in a regular oven, particularly a convection one. Usually, however, the minimum temperature on ovens is around 170 degrees Fahrenheit, a bit more than ideal for dehydrating. For us, the bigger problem would be that dehydrating ties up the oven for hours, and we need it to prepare dinner. Having a separate dehydrator is key if you’re going to make a lot of those fruity vegan treats.

The best way to get started might be to ask around your circle of friends and neighbors for someone who has a dehydrator. Would they mind loaning it to you? Unless they are a power-user, chances are they’ll be fine letting it go for a week or two. Run a few experiments of your own and decide whether you should buy your own. If you’re lucky, maybe they’ll offer to sell it to you for a song (or a fraction of your dehydrated bounty!).

Did you buy a dehydrator? What do you use it for? Share your best ideas in the comments.