“My husband doesn’t want to raise our kids vegan”: What’s a mom to do? 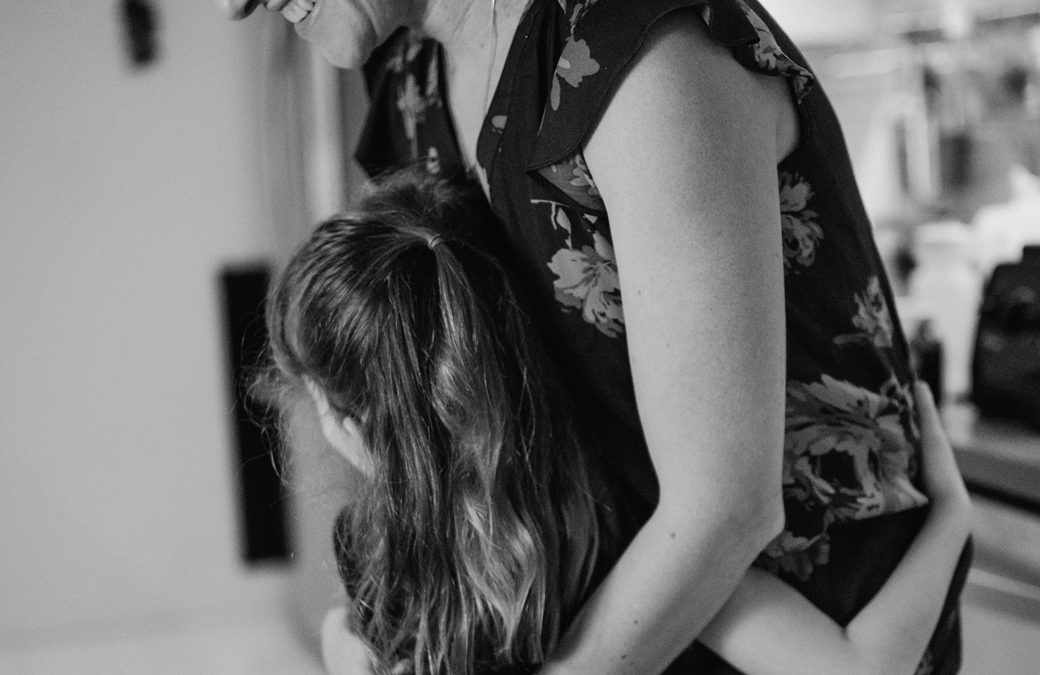 “Help! My husband doesn’t want to raise our kids vegan!”

“My partner refuses to hear anything about the health benefits of eating plant-based whole foods. He says that food is food and that our kids should be allowed to eat whatever they want.”

“When I am away my husband only feeds our son hot dogs and cheese pizza, what can I do?”

If any of the above lines resonate with you, know that you are not alone. There are hundreds, nay, thousands of moms experiencing a version of the same phenomena right now. Considering our social and cultural environment, it shouldn’t come as a surprise.

First, women are still far more engaged in food purchasing and preparation, kitchen cleaning, and household management, than men. On average, women spend 50 minutes per day on food preparation (26 minutes for men). Seventy percent of women were involved in food preparation and cleanup on an average day (43% of men). I’ll volunteer the educated guess that women with young children spend much more time than that, and that the gender gap is more pronounced then. Second, whether we like it or not, it is still true that women on average spend more time nurturing young children – which includes figuring out what to feed them, and trying to get them to actually eat whatever we think is best for them.

Third, there are statistically more women who are tuning to plant-based nutrition and to veganism – perhaps in part because they spend more time thinking about food to begin with, and consume so much more content about cooking.

At the household level, the result goes something like this:

Mom has spent a fair bit of time reading about the connection between nutrition and health. Or maybe she has seen a few documentary films or Youtube videos about animal agriculture. She decides that eating animal products is wrong, or at least should be avoided. She starts by drastically cutting back on her own consumption. Then, because she cares about her family, the animals and the planet, she looks for ways to reduce the share of meat, dairy and eggs on her loved ones’ plates. Except the children are picky and slow to embrace new foods. Most children go through picky phases anyway, but it’s easy to blame beans. Meanwhile, Dad is concerned about getting enough protein, complains of going hungry two hours after lunch, or outright thinks vegan food tastes weird. Either way, he says he “misses meat” and worries that the kids aren’t going to get enough calcium, iron, and protein.

Mom – who has put a lot of time and effort in researching plant-based food and actually cooking the meals – breaks down.

I understand that, at this stage, you might be brainstorming clever retorts and sending links from nutritionfacts.org to your husband. I would like to kindly suggest that you hold off for a moment.

Then, take another one.

But why wait? Isn’t it urgent to show him that you are right, that eating a diet of plant-based whole foods is not only the best way to save your children from chronic disease? That it can cure an ailment that you already suffer from? And by the way also necessary for the future of the planet?

Yes, yes and yes to all that. But people can only hear what they are prepared to listen to. Chances are, your husband is just not ready to hear the evidence and integrate it into his practice and morals, and in the way you are raising your children. Pushing, pushing, pushing with more information may not help him (or you), quite the opposite.

She says, they say

The fact is that, within the medical community, whether we like it or not, and despite all evidence, there still isn’t wide agreement that eating a plant-based diet of whole foods is the single best thing to do. If you ask your doctor to be a referee between you and your child’s dad, chances are she’ll say something along the lines of “eating animal products isn’t necessarily a bad thing.” The current Academy of Nutrition and Dietetics position on vegan diets is that “appropriately planned” plant-based diets can be perfectly adequate, and even improve health. They go as far as saying that vegans are at a lesser risk of certain diseases.  However, they do not say black on white that “eating animals is bad for you.” (When that happens, we’ll have something BIG to celebrate.) If your husband goes looking, he will find plenty of other statements by registered dietitians about other eating styles they consider healthy. Escalating the fight with scientific references will probably not help you win where it matters – at the dinner table.

However, a point of view that is gaining traction is that eating relatively more plant-based protein and fats (as opposed to animal-sourced ones) is a good idea. That’s reflected in the upcoming changes to the Canadian food guide (still underway and encountering lots of resistance from the animal agriculture industry, but few others). In the USA, Kaiser Permanente, a large private health insurer, is also encouraging patients and staff alike to embrace a plant-based diet… but still includes meat, dairy and eggs in its food offering.

The landscape is definitely improving in favor of the plant-based, whole foods way of eating, but it is not yet accepted as the mainstream it should be, including in the health professions.

Here’s what I do.

My husband is educated and health-conscious, but definitely not ready to identify as vegan. When he realized that I was now only cooking vegan meals at home, food became a dangerous topic. We had many fights. After each one, he tended to buy a steak, or a big piece of fish, and cook it for his dinner. Yuck. But at least he was eating my food as a side. So I stopped picking fights… but kept on cooking only vegan food. He relaxed. I cannot remember the last time he cooked meat for himself at home. It must have been at least two years. Although he has been a doubter of all health claims around plant-based diets, he is increasingly coming around. For example, now, he orders vegan foods for himself when eating out, even when there are meat or dairy options.

When I started down the path toward veganism, our first child was 18 months. Because my husband was quite reluctant to get on board, and I didn’t want to strain his good will (eating vegan food at home all the time already), I have not imposed vegan choices when eating out or visiting family. Nevertheless, our children now eat vegan food almost all the time. It is what they identify as “good food”. My eldest was holding on to salmon until recently, but yesterday at the restaurant instead of sashimi she asked for an avocado roll. My mother-in-law would sometimes put steak on my youngest’s plate, but he would only eat the veggies and beans so she knows better now… and she also cooks more vegan meals for everyone to share (even if I am the only vegan). I think that’s big progress. More to the point: I am not sure whether all this would have happened if I had been inflexible at the beginning. Change is happening, it’s going in the right direction, and it is sticking. That’s what matters most to me.

Get them to eat vegan

Although I am health conscious, and a bit geeky, I am not a nutrition expert. Still, I do not think that eating a few scraps of meat and dairy here and there will ruin my kids in the long term. At home, they eat 100% vegan food, almost all cooked from scratch. Their favorite foods are raw veggies and fruit, tofu and beans. That’s likely what they will return to their whole lives, even if at some point, outside of my vegan kitchen, they stray. I think giving them something healthy to go back to is a good legacy for them.

When you think about it, choosing vegan is pretty revolutionary in our culture. It took me a couple of years of reading and thinking before I decided to go full vegan, in my mid-thirties. My husband had never engaged with all the stuff I had been reading, he had other interests. How could I expect him to turn around so quickly? I am not asking my husband or our children to be vegan – just to eat vegan. I also educate my children by sharing my views about animal agriculture and environmental protection. They already show signs of growing into caring, compassionate, and loving young persons. I am hoping they will choose to make the same moral commitment as I did once they come of age, but it will be up to them at that stage.

One size does not feed all

Are you a mom whose husband doesn’t want to raise kids vegan? I hear your pain. I would get worked up, too, for sure! Things get even worse when extended family kicks in with their opinion, often in front of your children, and feed them in ways that you disagree with. Those are challenging situations to navigate and I do not believe there is a single good solution to them. Some moms cook two different meals. For myself, I choose not to touch animal products, but for the sake of shared parenting I decide to be flexible in other ways. I also create meal plans that are 98% husband-approved to make it easier for other moms to do the same as me.

I hope you are able to take a break from the arguments and enjoy some good vegan food – together! If you happen to be doing most of the cooking, chances are that your kids will not be eating junk all the time. Every piece of research I have seen shows that mothers’ influence on children is primordial. That includes attitudes toward food.

As their mother, you have a deep impact on your children. They learn from the way you feed them and seeing how you feed yourself. That impact will have more staying power than occasional stupid remark from others. The healthfulness and compassion you instill in them will have far greater persistence than the rest.

What do you think? 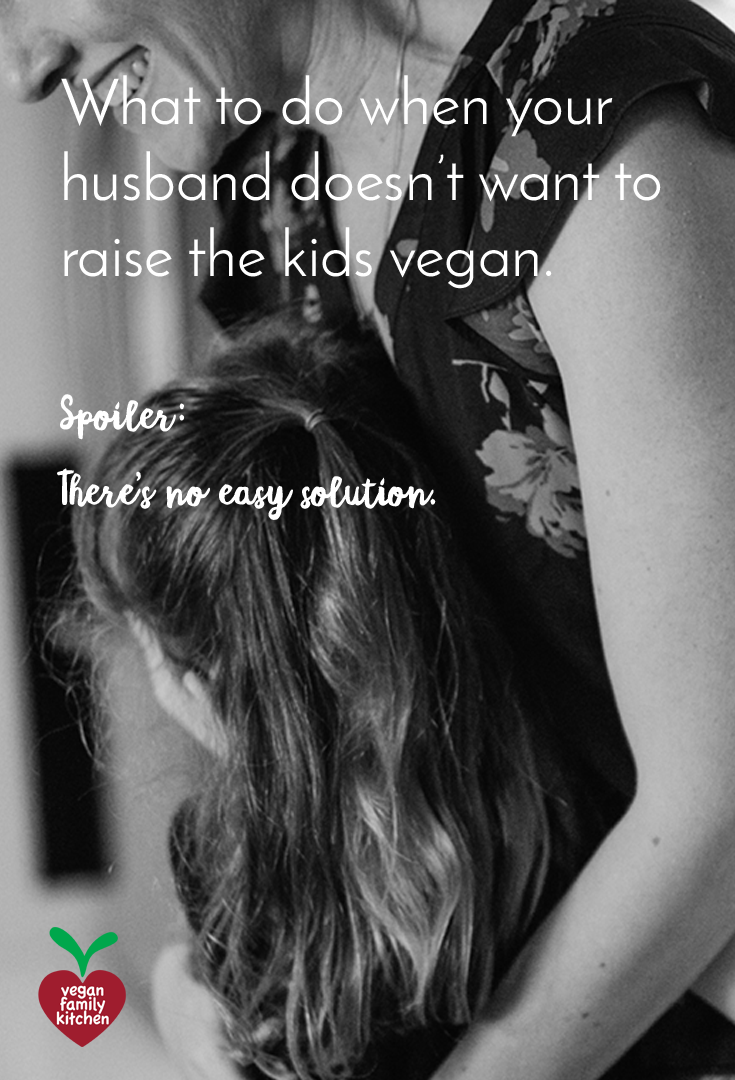