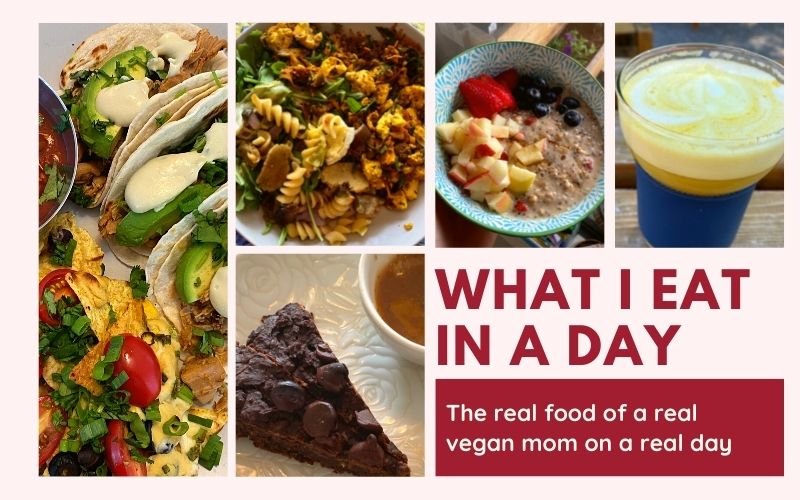 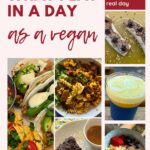 What I eat in a day as a vegan is mostly whole-foods, usually healthy, always plant-based food. In this post, I share what I ate on a typical weekday (Friday May 7th, 2021), and what guides those choices. I will mention what the rest of my family eats in passing, but this is really about me.

Because, let’s face it, if I am not nourished, I am in no position to nourish my loved ones… at least not in a sustainable manner.

When I talk about the importance of vegan meal planning and batch cooking, of course I highlight the importance of those habits to anyone trying to feed other people. I do believe it is important to take into consideration their peculiar taste. But, at the end of the day, the top reasons to do all this is to feed myself really good food.

I am not the food police. I don’t separate ingredients into “good” and “bad” ones. Clearly there are foods that make me feel better than others, but that’s not the only criteria that goes into deciding what I ingest. Let’s look at what I eat in a day as a vegan in detail. 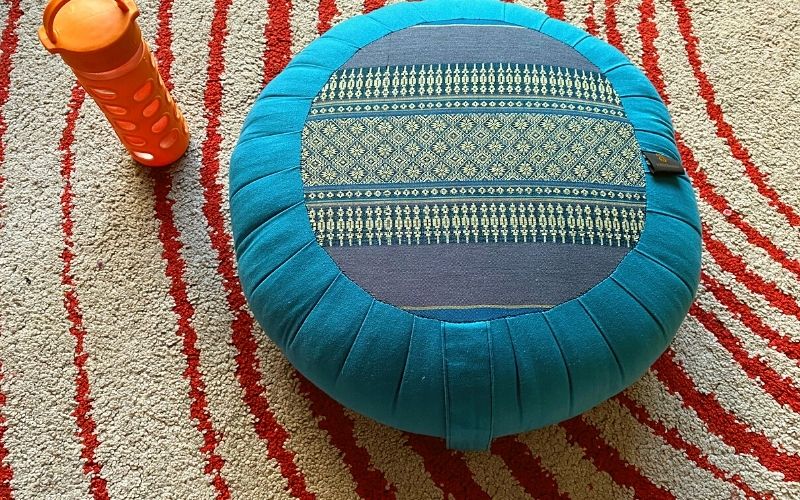 I used to wake up at 5 a.m. and empty my first cup of espresso by 5:05. Not anymore since I quit coffee… and had kids! These days, I wake up at 6 a.m. and pull out my water bottle from the fridge. Half the time, I drink it all (approximately 600 mL or about 20 oz) while I’m reading or writing in my journal, before meditating. On days when I am going for a run, like today, I have just a few sips, run for half an hour, then finish the bottle when I come back.

I also drink lots of water through the day and with every meal.

What I eat in a day as a vegan starts with my favorite meal: breakfast

Breakfast has been my favorite meal since I was a kid, even when it was just toast or a bowl of Shreddies (preferably with lots of fresh berries in it). These days, weekday mornings are all about making my kids’ lunches and getting them to school on time, so I often wait to have my own breakfast until after I have dropped them off. It accidentally lengthens my window of intermittent fasting. (I generally eat between 8:30 a.m. and 7 p.m.)

Since I often go for a run first thing after waking up, I can be ravenous by the time I get to feed myself. Enter my current darling: vegan overnight oats. 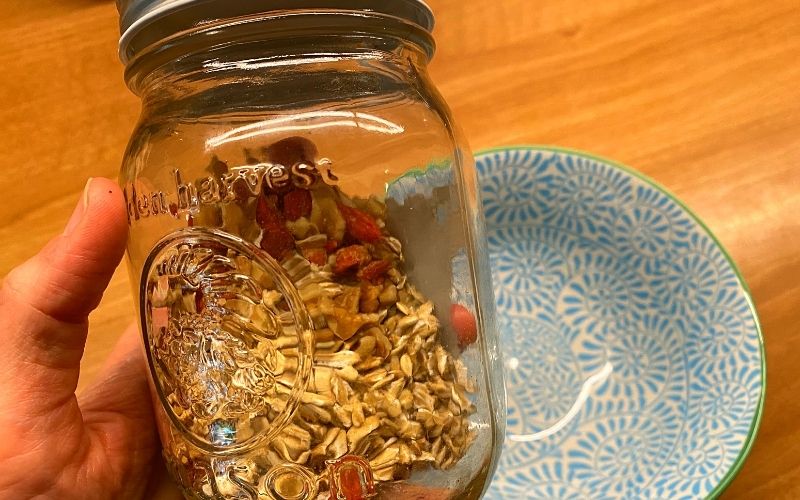 I love this vegan breakfast because I can batch a week’s worth of breakfasts in less than 10 minutes and keep it all at room temperature throughout the week, because my fridge is otherwise full on Sunday night.

Every night after wiping the stove clean from the remnants of dinner, I pour the content of my glass jar into my favorite breakfast bowl, and add a generous serving of home-made soy milk. I give it a quick stir, cover it with a lid, and leave it on the countertop until morning time. 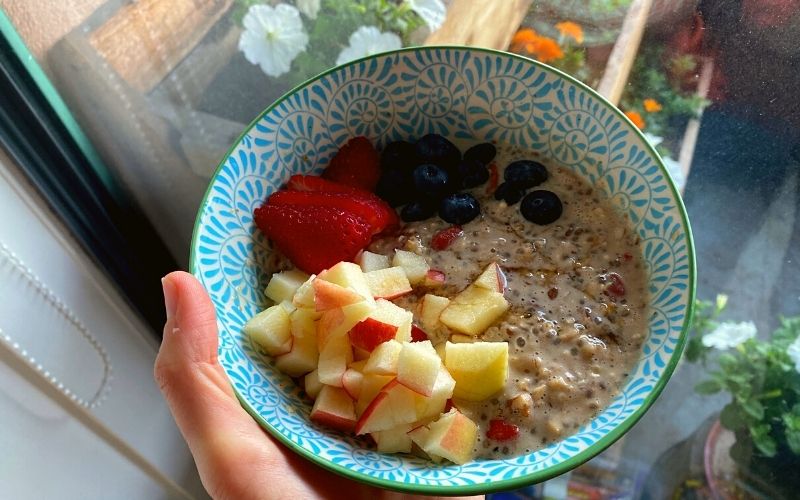 When it’s (finally!!) time to eat, I add a bit of water, stir again, and heat it up in the microwave for 1 minute and 23 seconds (1-2-3-start). If there are bits and bobs of fruit left from making the kids’ lunchbox, like apple or fresh berries, I add them on top of the hot oats.

in this specific bowl today, there are:

For the record, my husband usually prefers not to have breakfast. My kids aren’t big on breakfast either, and usually only have Cheerios with soy milk (Cheerios are thankfully vegan in Canada), or toast with peanut butter and jam.

Keeping me writing in the morning

Mornings are for my most creative work: either I’m writing blog posts, or I’m creating or updating vegan meal plans, or preparing for interviews. Typically I grab another water bottle, and a couple of squares of dark chocolate with a handful of peanuts and a few prunes. (I used to think prunes were awful and now I really enjoy them. Taste does evolve!) The real reason for this snack is that it reminds me of Reese’s peanut butter cups, but I also like that peanuts are a legume and a good source of cancer-fighting lectins.

However, that’s not the snack I actually had today. Look at this! 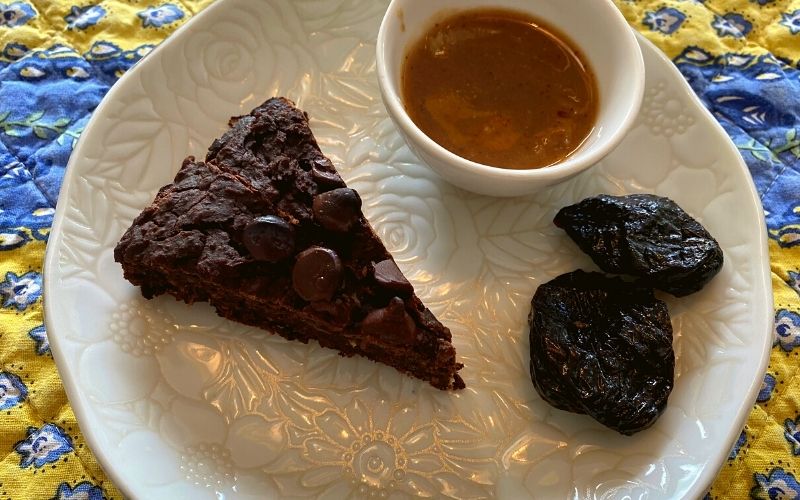 A couple of days earlier, I had tried a really healthy black bean brownie recipe. I’ll keep the source of the recipe quiet because really the results weren’t great. Healthy is good, but the sweetness of the dates was not sufficient to make up for the bitterness of the cacao powder. Plus, it baked for a bit too long. Bottom line: it was no-one’s favorite. To save it, I quickly whipped a little caramel sauce to dip it in: almond butter, a bit of coconut oil, and maple syrup. I would have made it with dates if I had any leftover, but I didn’t. Not an everyday treat, but I was not going to let all those good ingredients go to waste completely. Everyone enjoyed the brownie (with the sauce) but they weren’t popular in the next day’s lunch box.

I have to say that it made for a pretty nice snack. With the prunes on the side. 🙂

I am starting to reconsider my chocolate habit. The shift of chocolate from luxury to commodity makes me uncomfortable, and I don’t like the feeling that I have to have a piece in the morning. At least, when I skip chocolate, I don’t get headaches as I used to get when I skipped coffee. But I’m thinking of having a chocolate-free month for an experiment. Stay tuned!

Lunch for me is almost always leftovers from dinner. Today, I had a combo of pasta with roasted vegetables and tofu scramble, plus a bonus handful of arugula.

The pasta was leftover from a meal plan dinner. At home, I almost always follow my vegan meal plans – the same as my clients, only about one month ahead of them, so I can check all the recipes and make improvements as needed. Earlier this week, I made hummus pasta (one of my instant sauce suggestions) with roasted vegetables, and bonus slices of chickn-style seitan, for dinner.

The scramble was leftover after I took the photos to accompany my tutorial about the art of making a great tofu scramble from whatever you have in the fridge.

They were not meant to go together necessarily… but it was a delicious lunch anyway! I just reheated it all in the microwave for about 3 minutes.

For the record, my husband’s lunch, which he takes to work, usually also consists of leftovers, with a big salad of raw greens and veggies with nuts and seeds – no dressing. I think that’s a great idea and there would be health benefits for me to do something similar. I’m just not there right now.

As for the kids, I usually pack them a bento box of raw fruit and veggies with some pasta or crackers or quinoa, and plain beans… just as they like them. (To each their own!) Although on this specific day I think my daughter took a thermos of black bean soup to school. 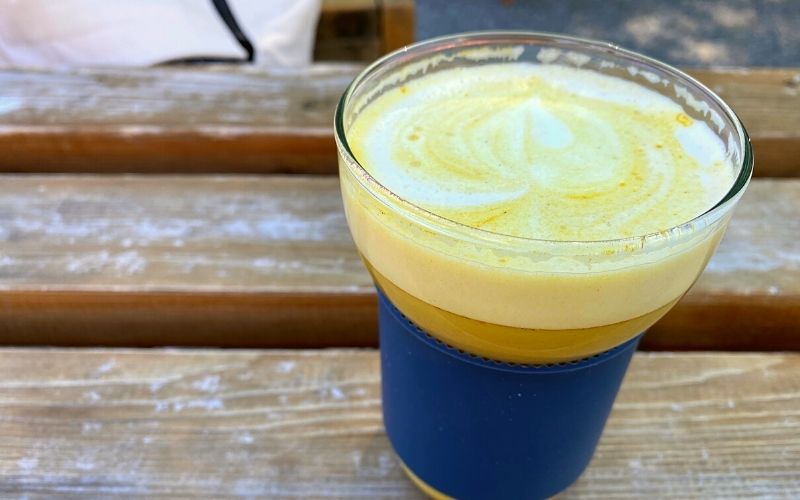 It was Friday and it was sunny, so when the kids asked if we could stop by the coffee shop on the way home, I said yes.

Normally I would have a chai latte with soy milk, however there was a poster advertising a new golden turmeric latte by the cash register, so I thought I’d give it a shot.

It was good, but to be candid I find that the one I make at home myself is better. (I put a handful of cashews in the blender with a chunk of ginger and a teaspoon of turmeric, plus a date, and a big cup of boiling water. Amazing!)

The kids had hot chocolate with soy milk. 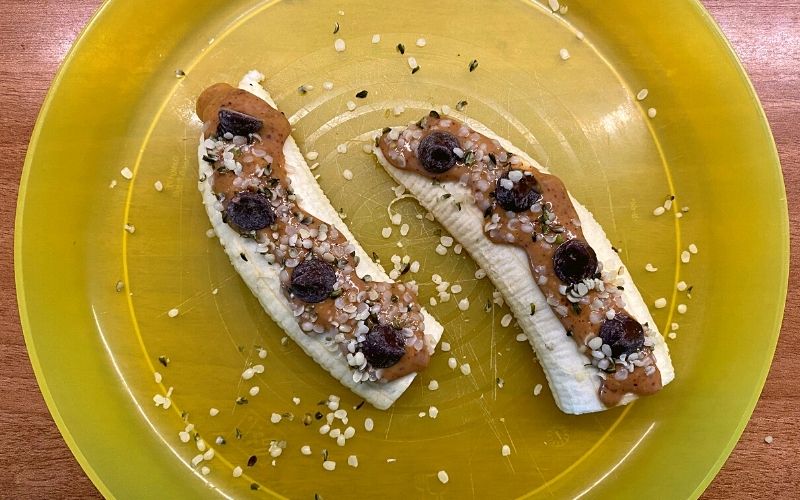 At 3 p.m. I pick up the kids and they are always starving. They often haven’t eaten their entire lunch because they were too busy playing or talking, so by the time we walk home from school their mood can be impaired by low blood sugar. Banana sushi to the rescue!

Between the three of us, we share two big bananas. I split them lengthwise so they are stable and don’t roll away. It also increases the surface available for toppings. The kids prefer a layer of Wowbutter on theirs (it’s made from roasted soybeans and intended as a nut-free alternative to peanut butter) while I used an almond-hazelnut butter mix on mine. The banana gets dotted with a few chocolate chips and, for my daughter and I, a sprinkle of hemp seeds.

Dining from the vegan meal plans: so thankful for Past Me who prepped! 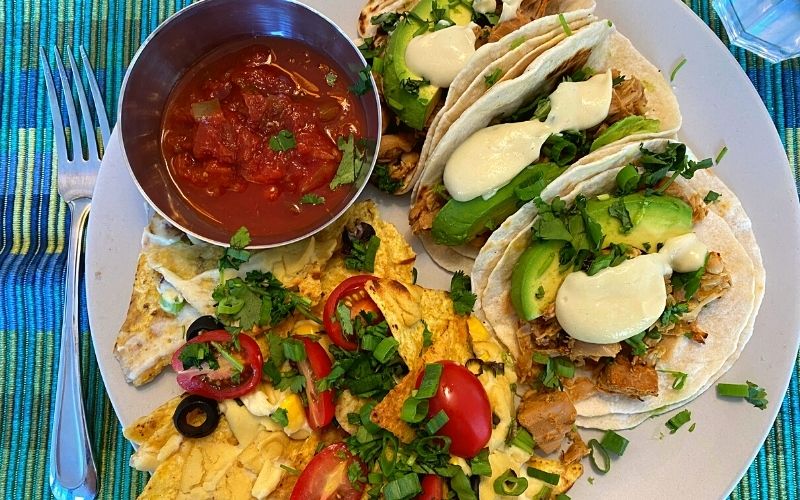 On Fridays I aim for a “fun” dinner, and tacos make an appearance on the Vegan Meal Plans every 6 weeks or so. I was cooking from the week 21 meal plan which called for jackfruit tacos with a side of fully-loaded nachos. The jackfruit mixture also has beans for extra nutrition, since jackfruit on its own is not particularly filling. It was prepared ahead as part of the prep session last weekend, which also gave the spices extra time to infuse the dish and yield an even more flavorful dinner. Could I have cooked this right before dinner? Maybe. But maybe not. In addition, including this dish in the prep session allowed me to double batch and freeze the leftovers for the jackfruit casserole I will be making next week.

(Even if you aren’t a meal plan subscriber, I recommend planning your meals 2 weeks at a time to be extra efficient.)

As a side to the tacos, we enjoyed nachos piled high with black olives, corn, black beans, cherry tomatoes, and lots of cilantro, drizzled with lots of my cheesy cauliflower cream – another prepped building block from the Vegan Meal Plan. I would definitely NOT have made that one on a weeknight. Not because it’s long or complicated, but because it adds to the amount of dishes. (Batch cooking is a more efficient, less messy way to cook… if you have a plan to follow, like this free 8-recipe batch cooking plan.)

My husband ate the same as me. My daughter loved the jackfruit mixture and tortillas, plus olives. My son had only tortillas with plain black beans.

We finished dinner around 7 p.m., which marked the end of my eating day. I am not firm about it, and sometimes will enjoy a few handfuls of my husband’s popcorn (just corn kernels popped in the microwave) along with our Friday Family Movie Night.