Why I recommend an inexpensive slow cooker for plant-based cooking (no affiliate links!) 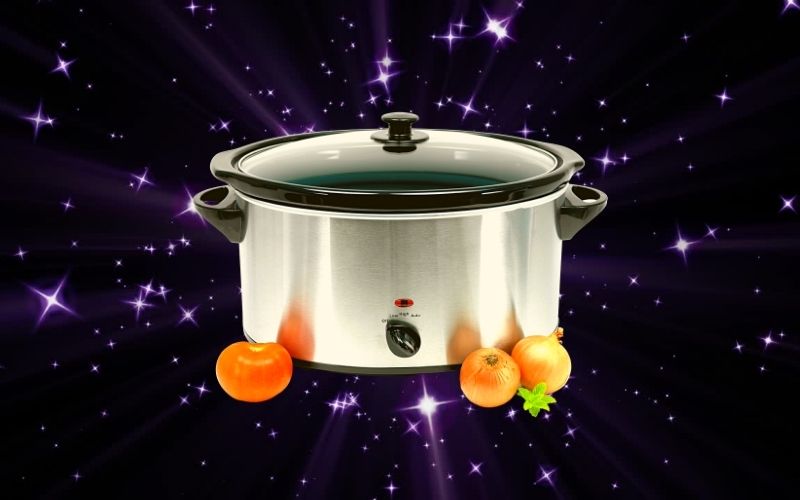 Many people bought a slow cooker only to leave it to gather dust on top of their fridge. That’s really too bad because using a slow cooker for plant-based cooking is a great way to decouple cooking from eating: throw in the ingredients in the morning, switch it on to “low” for the day, and come back to a fragrant simmered dinner waiting for you in the kitchen 8 hours later. It makes an even greater contribution if incorporated into your weekend batch cooking arsenal, as I will explain below. For good results, however, you do need to know what’s the right thing to cook in there.

Jump straight to the topics you are curious about

Why did slow cookers seem to fall out of favor?

With the aggressive marketing of Instant Pots these past few years, the more low-key and decidedly inexpensive slow cookers have sadly been forgotten. Some people – myself included! – even made the mistake of letting go of their slow cooker when they first got an IP, which I quickly found out to be a mistake. From a business standpoint, slow cookers aren’t great: the simpler they are, the better they perform, so you can’t re-market them and sell many more units by adding new features every other year. No repeat customers! Plus, they don’t even break easily. But don’t be fooled: slow cookers are great for plant-based cooking and I recommend that you use yours at least once or twice per week.

In this post, I will review the main benefits of slow cookers for plant-based cooking, talk about the downsides (and how to work around them), and make some suggestions for recipes that work great in the crock. I’d love to hear about your favorite slow cooker dishes in the comments below.

Benefits of using a slow cooker for plant-based cooking

What’s not to love? Those benefits are the reasons why I include a slow cooked recipe in almost every single week of the Vegan Meal Plans. 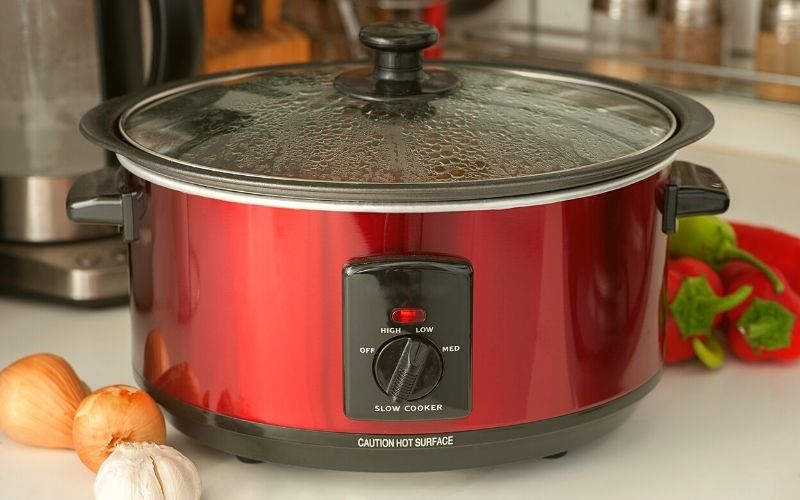 My best recipes for the slow cooker

Slow cookers are the natural allies of all things simmered, so soups and stews are perfect to cook in that crock. Here are some examples. In practically every case, you will want to start with an onion, add a bunch of vegetables, probably some beans or lentils, and suitable seasonings, plus some liquids.

What slow cooker to buy for plant-based cooking?

Buy the simplest slow cooker you can find, with the smallest number of features. It should be manual (not electronic or programmable in any way), with just a switch to choose between “off,” “low,” and “high” heat. Some slow cookers also feature a “keep warm” temperature that is good when serving, say, bean chili to a crowd on game day, but really it’s a frill feature that isn’t completely required.

Why the allergy to features? My experience is that programmable and electronic slow cookers are prone to error and failure. I’ve had one that would spontaneously switch from low to high at a random point during cooking, ruining my dinner in the process. The electronic panel of another one stopped working one day and could not be revived – again ruining dinner, and requiring replacement. The idea of programming the slow cooker to go from “low” to “keep warm” after a certain number of hours is appealing in theory, but really cooking on low for another hour will not ruin your soup. If no-one will be back home to attend your food within 10 hours, then it’s probably not a great idea to leave a small, hot appliance running for that long anyway.

I find that the six-quart size is perfect because it allows to cook approximately 8-10 individual portions, with enough room to spare at the top that the contents don’t spill every time you stir. The extra food goes for lunches or into the freezer for another week.

Four-quart slow cookers can be frustrating as they will be too small to double up recipes. The tiny two-quart ones are really only good to keep artichoke dip warm in a party spread.

As for the really big, eight-quart slow cookers, I find that they are hard to store in the average kitchen cabinets and also slower to warm up, thus extending cooking time.

Where should I buy my slow cooker for plant-based cooking?

Slow cookers – the simpler ones with only manual switch described above – are the perfect item to buy second-hand. Thrift stores and Facebook Marketplace are two common places to search. To be extra safe, you can test it with water and a thermometer before your first “official” use, so you don’t ruin a pot of soup. (The water should reach a temperature of at least 170 degrees F or 80 C on the low setting after 3-4 hours.) That should set you back about $10. You might score a free one from a friend or your local Buy Nothing Project group.

If you insist on buying it from a store, the models I recommend cost less than $25.

Whatever you do, please don’t get it from Amazon.

Why slow cookers are great appliances for batch cooking

Weekend batch cooking sessions are the most efficient way to use our time in the kitchen, especially when following a carefully crafted plan. Adding a slow cooker to the mix can make those sessions go even further. Here’s how:

The result will be a whole extra ready-made pot of soup or stew, with hardly any additional dishes or time spent at the stove. 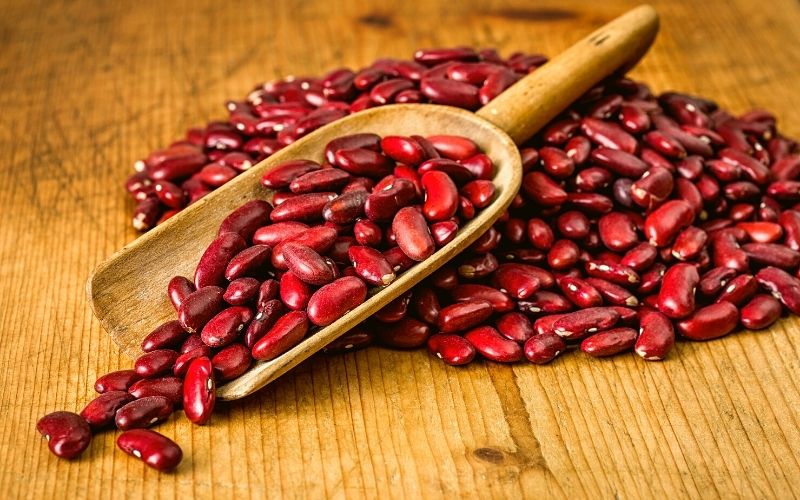 Why I don’t recommend cooking (most) dry beans from scratch in the slow cooker?

Some beans, when raw, contain a naturally-occurring lectin-type protein called phytohaemagglutin, or PHA, that cause damage to red blood cells. (Phyto means plant, haema refers to blood, and glutin refers to clumping together.) Kidney beans have the most, but white beans (cannellini), fava beans, and black beans have some too. When PHA is detected in the gastro-intestinal system, our body is very eager to get rid of it, leading to vomiting and diarrhea. Although it can be violent, the reaction is usually ridden out by healthy people in just a few hours. However, those with compromised health could end up in hospital, or worse.

Thankfully, this can all be avoided by cooking those beans thoroughly. They need to be brought to at least 80 degrees Celcius or 176 degrees Fahrenheit for at least 30 minutes (possibly less if the beans were previously soaked). Unfortunately, the slow cooker does not reliably reach those temperatures. That is why I do not recommend cooking dry beans from scratch in it. My preferred method for cooking beans from scratch is the Instant Pot. Previously, I just used the stovetop method, but it takes longer, requires more attention, and generates lots of vapor.

Chickpeas and lentils however are fine to cook in the slow cooker as they do not have a problem dose of PHA.

(Worried about lectins in general after reading The Plant Paradox? This video from nutritionfacts.org debunks the myths: Are Lectins Good or Bad For You?)

Can’t I use my Instant Pot instead of a slow cooker for plant-based cooking?

Most (all?) electronic pressure cookers have a “slow cook” mode… but personally I don’t trust slow cooked meals with my Instant Pot. In single-function slow cookers, the heat comes evenly distributed from all around the crock, whereas the element of the Instant Pot is on the bottom. It is more likely to lead to burnt food at the bottom of the pot and uncooked food at the top.

This being said, if all you have is an Instant Pot right now, you can make it work almost like a slow cooker by using it on the “low” setting only (check your manual), stirring the food every 2-3 hours or so (scraping the bottom to make sure there are no burnt bits there), and increasing the total cooking time by perhaps an hour (to make up for the times when you lifted the lid). Make sure to review your manual’s instructions with regards to proper lid placement during slow cooking (or use a glass lid from a different pot). It may not be a good fit if you are going to walk away for the whole day, but if you are working from home it’s probably fine.

If you have the extra space in your kitchen – above your fridge perhaps? – consider spending the $10 to get a separate slow cooker.

Will you use your slow cooker to make a soup or stew this week? Tell me about it in the comments.