The 3 most useful kitchen appliances for plant-based cooking (no affiliate links!) 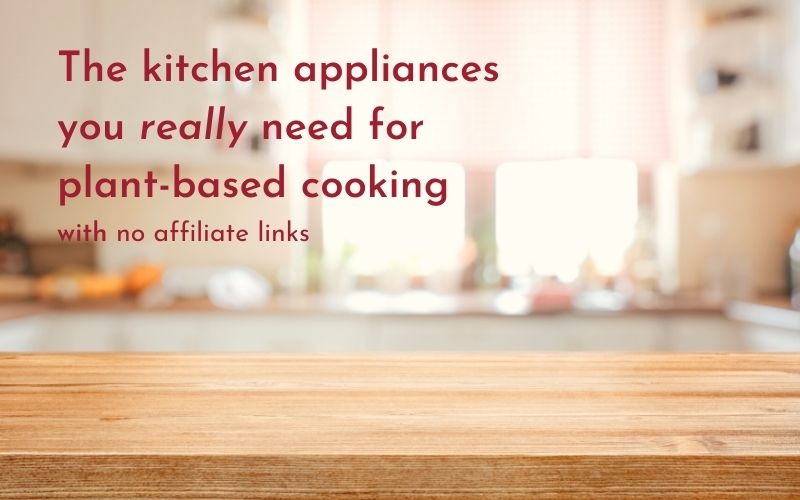 What are the really, truly useful kitchen appliances for plant-based cooking? Here are my choices as a professional home cook who prepares a different plant-based meal, mostly from scratch, using whole foods, most days of the year. There are no affiliate links here, as my goal is for you to buy as little as you need. It’s not like the planet needs another hard-to-repair-or-recycle gizmo to be made.

What does “no affiliate links” mean when looking for kitchen appliances for plant-based cooking?

As we approach Black Friday and the Holidays, bloggers and news web sites are publishing articles about “the 562 must-have kitchen appliances for vegans” with promises of making your cooking life easier. Here’s why: the publishers rely on affiliate income. How does that work? When you click a link from their blog to Amazon’s web site (among others), a portion of their purchases during the next day or two goes back to the publisher.

I understand why bloggers do it. But as an ethical vegan who originally started cooking plant-based food for environmental reasons, it’s not a practice I want to partake in. We have enough stuff already. Making matters worse, all those affiliate links also contribute to the dominance of Amazon over all other businesses, because they increase the odds that a Google search for kitchen appliances will return an Amazon result on top. It’s not like it’s a company that deserves more exposure. 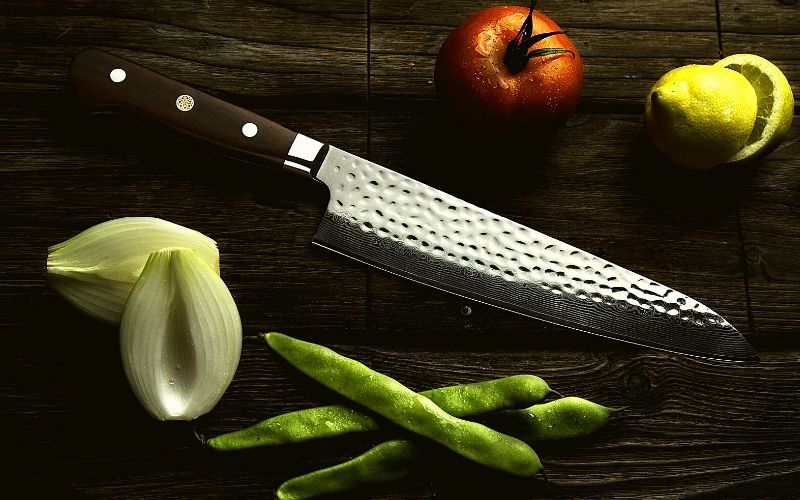 What are my recommendations of kitchen appliances for plant-based cooking based on?

My recommendations for kitchen appliances for plant-based cooking are based on my personal experience as a somewhat-but-not-totally minimalist cook.

At the end of the day, the only thing you really, really need is a great, sharp chef’s knife and a wood cutting board. Oh, and some cast-iron skillets.

But there are other very useful kitchen appliances that make plant-based cooking easier. My recommendations are based on how often I use a given appliance, how unique its contribution is, and whether the usefulness justifies the price tag. 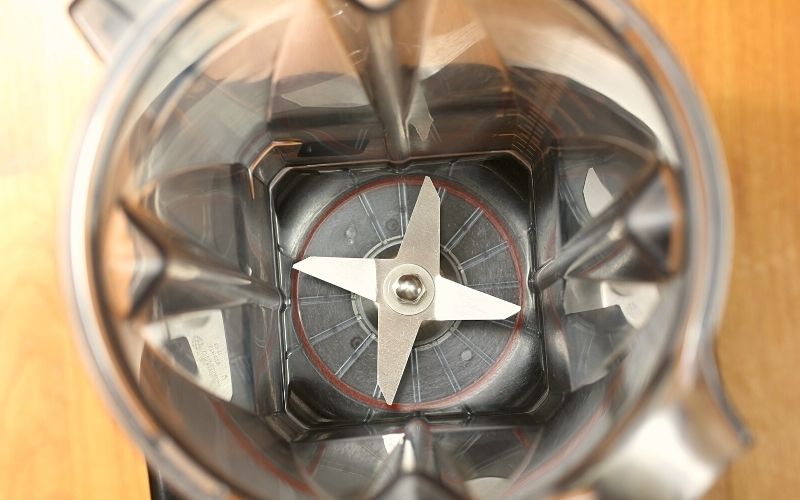 I acquired my Vitamix 7500 at the same time as I became really serious about plant-based cooking. I loved how it enabled me to blast dairy out of my kitchen by quickly creating an endless range of dairy-free sauces, beverages, and concoctions without a mess. Obviously, it also makes awesome smoothies. And it’s a charm to clean. I use mine at least three times per day, often more.

Over time, I discovered how to use it to increase my use of whole foods in contexts where lightly processed ingredients would have had to be purchased instead. For example, whenever a baked good recipe calls for plant milk, I just throw a few tablespoons of nuts or seeds in the blender, along with a suitable quantity of water, and bam! plant-milk plus extra fiber. It makes it easy to add nutritious ingredients to recipes, like sweet potatoes to chocolate cake, and make pesto from anything green. I even put banana peels in the blender, along with the flesh, to make banana bread and no-one – nobody! – notices. Amazing.

High-power blenders such as Vitamix and Blendtec are not cheap, but in my opinion they are worth saving your money for months or years to purchase one ahead of every other kitchen appliance out there. They never show up on the second-hand market because they are appliances that people actually use. Refurbished options are great however.

If you have more spare change, or if a loved one is looking to make you a gift, asking for a second container in a different size is a great idea. I have the squat 64-oz container that I use every day (the one that came with my 7500), a 32-oz container that’s great for dressings and small amounts of sauce, and a stainless steel one I use for hot sauces and golden mylk preparation.

The Vitamix and Blendtec brands are both reputable. You will find endless chatter on the Internet about which one people prefer, but make sure you check the source of those opinions: many writers are affiliates of one brand or the other. I do not have personal experience with Blendtec but my Made-in-USA Vitamix was serviced twice during the 7-year warranty, both times very efficiently and at no cost to me, not even shipping. I’m sure you can pay less for equally-powerful blenders these days, but they may not be as reliable for quite so long. Your mileage will vary. 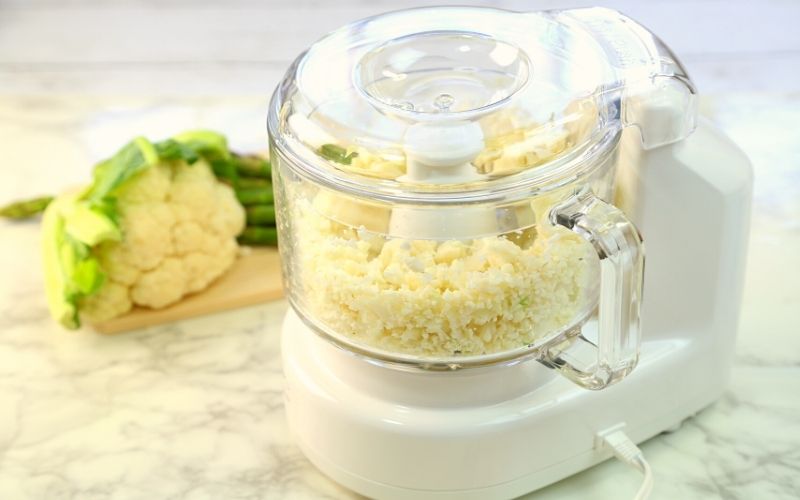 As much as I love my Vitamix, there are a few things it doesn’t do very well. In particular, it pulverizes the ingredients of plant-based burgers and “meatballs” to smithereens so fine that they turn to unpleasant mush. Oddly, I find the high power blender doesn’t make a great hummus.

Enter the food processor with its dual rotating blade and impossible-to-clean nooks and crannies. The wider base makes it possible to process ingredients into a heterogeneous but reasonably even mixture.

I use my food processor approximately once every two weeks, usually in a batch cooking session, for 2-3 different recipes. Mostly, it’s for making burgers, plant-based meat loaves and meatballs, vegan quiches and frittatas, and hummus. I might use it more if it wasn’t so hard to clean; if you decide to buy one, look for independent, honest reviews and pay particular attention to comments about ease of cleanup. Once in a blue moon, if it’s already out, I use it to grate or slice vegetables, but I wouldn’t pull it out of the cabinet for that. I work faster with a knife or box grater.

Food processors are easy to find on the second-hand market because many people receive them as a gift and do not know what to do with them. No need for fancy features. The best one I ever had was a $40 model from the hardware store. (Sadly I sold it when moving and made the mistake of buying a fancier one a few years later.) 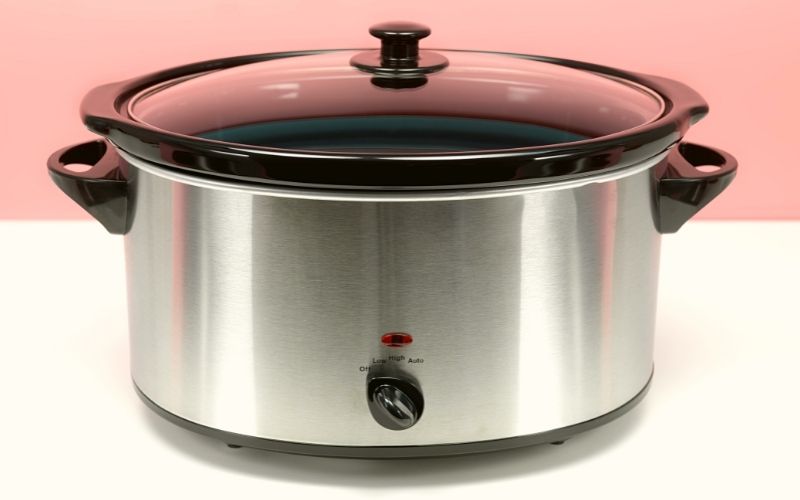 I love kitchen appliances that allow me to decouple the time of cooking from the time of eating. Slow cookers and Instant Pots are both excellent at this, in their own way.

Slow cookers (also known as crock pots) can be purchased for $10 on Facebook Marketplace any day, and the most basic models (those with just a hi-low mechanical switch) are best and most reliable. I include slow cooker recipes in the Vegan Meal Plans practically every week because they are just super convenient to make soups and stews of all kinds.

Instant Pots do not actually cook the food faster but, for most operations, they do not need to be watched once the lid is sealed. I mostly use mine to cook beans from scratch (a sufficiently important function in our life to deserve its own appliance), but on occasion I cook a simmered dish in it, or use it as a steamer. It’s especially awesome to efficiently cook corn on the cob. I wrote a detailed explanation of what I do with my Instant Pot and how to shop for one which you can read here: Should I get an Instant Pot? 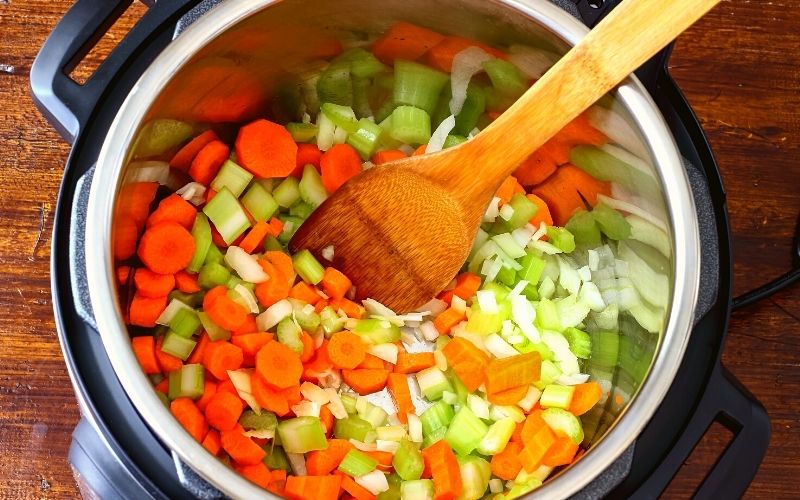 Honorable mentions: kitchen appliances that are pretty useful but not essential

Stick blender or immersion blender: I use this gadget at least once or twice per week when making creamy soups or if my daughter asks me to blend her lentil soup or bolo sauce smooth. The one I currently have is made of metal which I prefer as it gets immersed in hot liquid. Avoid models that come with extra gadgets: they are solutions looking for problems. 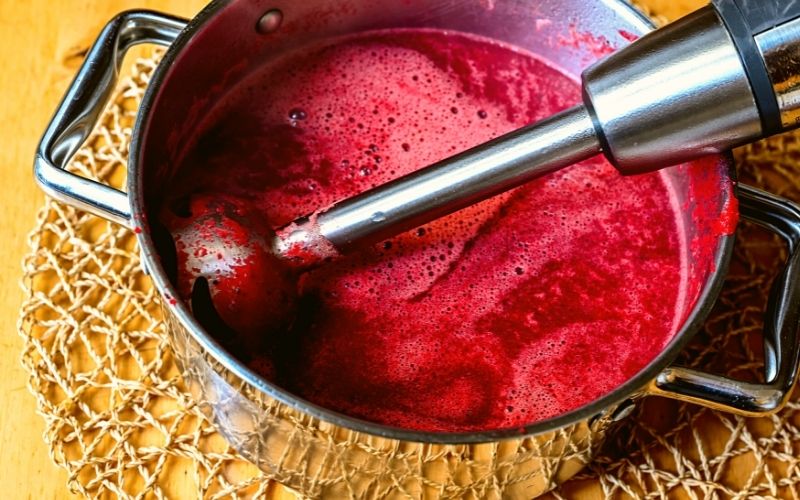 Stand mixer: If you bake a lot, or love making fluffy miracles out of aquafaba, you need a proper stand mixer. I don’t. Still, I couldn’t resist buying a nice and heavy red Kitchen Aid stand mixer of the Artisan line from a lady who had received two as wedding gifts, and I use it occasionally. Mostly, it occupies my thoughts when I think about decluttering the kitchen: where could I put it so it doesn’t use counter space yet remains easy enough to pull out that I actually want to use it? It does make pizza-dough prep a little quicker, and obviously it’s the best way to achieve an amazing coconut whipped cream or aquafaba chocolate mousse. Also an asset when it comes time to make sugar cookies and icing during the Holidays. Hand-held mixers are OK for many uses but if you’re going to invest I’d say try and find a second-hand stand mixer. Or put it off until next year. Maybe you can borrow one from a neighbor before cookie season?

Waffle iron: My kids love waffles, and I make them in the blender almost every day. I love my Cuisinart vertical waffle maker because it has a small footprint. This said, I was also perfectly happy to use a variation of the same recipe to make pancakes on my cast-iron griddle instead.

Dehydrator: I love mine, but only because it has its own designated space. Read more in my blog post: Should I buy a dehydrator? 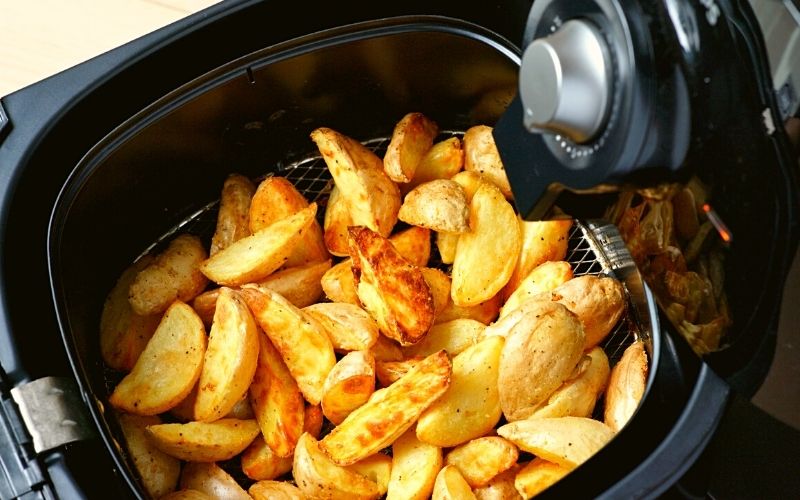 What about air fryers?

I don’t have one. I decided against it when I realized that air fryers are basically compact convection ovens. I have a Cuisinart countertop toaster oven with “double convection” mode that comes close however. The benefit of the toaster oven I have is that it fits two quarter-sheets – that’s a lot of food. It also does other things like… toasts. And I can bake as many as 24 regular muffins in it. The downside is that, if I am aiming for an air-fried result, and open the door to flip the food, the temperature decreases rapidly and takes a while to increase again. (My mother has a similar but smaller Cuisinart model that really crisps food well.)

I think stand-alone air fryers are great if eating processed vegan food regularly but in small quantities. What do you think?

Kitchen appliances I don’t recommend getting

Rice cooker: Nope. I use my healthy and easy brown rice cooking method on the stovetop instead. It works for quinoa and other grains, too.

Thermomix and other smart cookers: Even if they sold for only $200 (as opposed to over $1,000), I wouldn’t know what to do with a Thermomix for everyday cooking. I don’t need to precisely control temperature (except if making yogurt, which my Instant Pot can handle just fine) and, most importantly, I don’t need the machine to tell me how much to put in of what ingredient. Clearly, I’m not in the target market for that gadget: I follow my own recipes, those of reputable vegan chefs, and mostly I just improvise based on what I have in the pantry and produce drawer. There are some people who’d rather use one than cook on their own, and that’s OK. If you think that might be you, I suggest reading the New York Times’ review before pulling out your credit card.

Electric griddle: Just use a cast-iron skillet, perhaps with a grill press if you have a habit of making sandwiches. (If you’d like to learn more about cast-iron cookware, read my blog post: Cast-iron cooking for vegans.)

Did I forget a really important kitchen appliance for plant-based cooking?

I’d love to know your thoughts.